While the COVID-19 pandemic and 2020’s oil price collapse hit Argentina’s hydrocarbon sector hard, leading to some analysts to claim that it may never fully recover, there is evidence of a healthy rebound is underway. This is especially positive news for the national government in Buenos Aires which for nearly a decade has pinned its hopes on fueling an economic revival by exploiting the massive hydrocarbon wealth of the Vaca Muerta shale play. The massive shale play, located in the oil-rich Neuquén province, is thought to hold recoverable hydrocarbon resources consisting of 16 billion barrels of oil and 308 trillion cubic feet of natural gas. Those numbers make the Vaca Muerta the world’s second-largest shale gas deposit. The shale formation is often compared to the prolific U.S. Eagle Ford shale, although unlike the U.S: shale play the Vaca Muerta’s dry gas window has proven to be commercially viable. For those reasons it is easy to understand why Buenos Aires views the hydrocarbon-rich geological formation as a silver bullet for Argentina’s economic woes, especially after May 2020 when Buenos Aires defaulted on its sovereign debt for the second time in 20 years.

The Vaca Muerta shale play along with Argentina’s overall oil industry was hit hard by the COVID-19 pandemic. Since hydrocarbon production (Spanish) bottomed during May 2020 it has been steadily climbing with oil output reaching a 12-month high of 504,119 barrels per day, a 13% increase over the same period a year ago. Natural gas production, however, declined by 2.6% to be 762,672 barrels of oil equivalent daily. As a result, Argentina’s overall hydrocarbon production of 1.27 million barrels of oil equivalent per day was only 3% higher year over year. 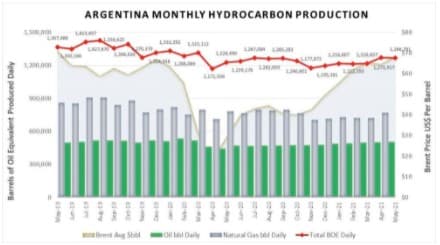 It is Argentina’s national oil company Yacimientos Petrolíferos Fiscales SA known as YPF, which has become the driving force behind developing the Vaca Muerta. For that reason, there were fears that a liquidity crisis caused by a large portion of YPF’s debt falling due in March 2021 would derail the state-controlled oil company’s planned investment to develop the shale play. YPF was eventually able to resolve that worrying development through a debt swap, which has had no lasting material impact on its planned development of the Vaca Muerta.

Activity in the shale formation is ramping up at a solid clip. Even the April 2021 protests, where healthcare workers blockaded roads to the Vaca Muerta, have had little material impact. YPF earmarked an investment of $1.5 billion to develop its assets in Neuquén province where the Vaca Muerta shale play is located. Argentina’s national oil company intends to use that investment to boost provincial oil production by 56% and natural gas output by 70% during 2021. French energy supermajor Total Energies announced in April 2021 that it had approved the development of the Aguada Pichana Este license, located in the Vaca Muerta, and increased its stake in the operation from just over 27% to 41%. Anglo-Dutch supermajor Shell continues to make significant investments in the shale formation. The integrated energy supermajor is pressing ahead (Spanish) with an $80 million investment to build a 120,000 barrel per day 105-kilometer-long pipeline in the Vaca Muerta.

Data from Baker Hughes showing that drilling activity is steadily increasing. By the end of June 2021, there were 45 active rigs, according to Baker Hughes, which was the same as a month prior but is notably significantly higher than the six active rigs at the end of the same period in 2020. 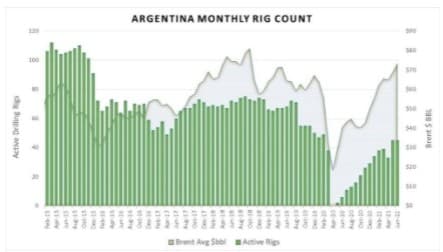 An Argus Media article shows that during June 2021 985 fracking stages were completed in the Vaca Muerta, which while being 9% lower than May when a record 1,079 stages were completed, was still an impressive five times greater than a year earlier. It was YPF which is leading investment in the shale formation completing 532 fracking stages or 54% of those conducted during June. Those solid numbers for both the rig count and fracking operations indicate that the tempo of operations in the Vaca Muerta is growing at a solid clip boding well for further oil and natural gas production to keep expanding.

International energy companies are committed to making substantial investments in the Vaca Muerta despite Argentina’s high breakeven price per barrel. Analysts and industry insiders estimate that on average oilfields across Latin America’s fifth-largest oil producer have a breakeven price of $45 per barrel. New projects in the Vaca Muerta are projected to have a breakeven price of over $50 per barrel which during periods of sharply weaker oil prices has deterred investment. Those breakeven prices are significantly higher than other regional producers including Brazil, Guyana, Colombia, and Ecuador. YPF is, however, focused on reducing drilling costs with Pablo Iuliano, YPF’s vice president of unconventional upstream telling S&P Global Platts at the end of 2020 that the company is driving efficiencies to push the breakeven price below $30 per barrel. There are signs that such a significant decrease can be achieved, particularly as further infrastructure is developed in the Vaca Muerta. Impressively, YPF reported for the last twelve months combined lifting and development costs of $14.60 per barrel which is 8% lower than for the full year 2020, boding well for lower breakeven prices. If breakeven prices fall below $30 per barrel YPF’s shale hydrocarbon production will be highly profitable and resilient to weaker oil prices. Such a breakeven price would be among the lowest in South America, enhancing the attractiveness of the Vaca Muerta as a destination for investment by foreign energy companies. The appeal of investing in Argentina’s energy patch is enhanced by the primary crude oil grade produced, Escalante, being particularly sweet with a sulfur content of 0.19% and an API gravity of 24.1 degrees. This is important because the demand for low sulfur content medium and light crude oil grades is steadily expanding because of every stricter sulfur emission regulation for fuels. There are even reports of Escalante cargoes being exported to the Middle East during 2020, while China’s thirst for sweet medium and light crude oil grades continues to grow.

A key deterrent for many foreign energy companies when it comes to investing in Argentina is a long history of the government meddling with the petroleum industry. This has included punitive regulatory and tax environments, artificial pricing and even the nationalization of privately owned assets. For those reasons, the leftist government of President Alberto Fernandez must convince foreign oil companies that it can establish a stable, transparent regulatory framework with market-based pricing where profits can be easily repatriated without punitive taxes being applied. The latest developments indicate that Buenos Aires may be finally on the path to realizing the vast hydrocarbon potential held by the Vaca Muerta, which will give Argentina’s beaten-down economy a solid boost.

By Matthew Smith for Oilprice.com

Read this article on OilPrice.com

This story originally appeared on Oilprice.com