Best Mutual Funds: This One Invests In Innovators

He’s looking for companies that create or use innovations that give enterprises and consumers an edge. His fund’s weighting in technology sector stocks was 36% as of May 31, says Morningstar Direct.

A second key to his fund’s effectiveness is his mix of two types of growth stocks. His larger group consists of older, better established growth stocks. They’re more likely to be firing on all cylinders. He calls them his stable growers.

His second, smaller group consists of stocks in younger, smaller companies. Some are growing revenues very fast. But earnings growth is less reliable. He calls them his dynamic growers.

The mix makes it more likely that many holdings are thriving no matter what the broad economy is doing. “That mix is our secret sauce,” Werner said.

Some successful enterprises benefit from technology in little-expected ways. Gym chain Planet Fitness (PLNT) is an early life cycle, dynamic growth company. It is still aiming to resume the steady quarterly revenue and earnings per share growth it enjoyed before the coronavirus pandemic.

But Werner feels the stock can help his portfolio remain among the best funds. “During the pandemic, they began to provide digital content to users,” Werner said. “They now offer classes over the internet. They’ve gone from offering just a physical brick-and-mortar gym presence to an omnichannel experience. Consumers can work out in whatever way they want, whatever time of time they like, in whatever location they like.”

DocuSign (DOCU) is another early life cycle, dynamic growth holding that can help Capital Growth fight for its spot as one of the best mutual funds.

Shares have rocketed 70% off their mid-May low, going into Thursday. Apparently, a lot of people have decided that, pandemic or no pandemic, they’d rather sign documents electronically at their desks than visit a lawyer or notary. “Why would anyone go back to pen and paper?” Werner asked.

Earnings per share growth has soared at a triple-digit pace for at least six of the past seven quarters. Revenue has grown over 50% the past three stanzas.

Once DocuSign establishes a beachhead in an enterprise, it lands new customers in departments other than the one its initial relationship was with, Werner says. “That can create a long tail of growth,” he said.

And DocuSign is finding new clients in new markets where contracts require signoffs at multiple stages, he adds. “They have a total addressable market of $50 billion,” Werner said. “Their penetration is only in the low single digits. Their retention rate is high. That makes this a unique company that should have high growth for years to come.”

Providing A Spark To One Of The Best Mutual Funds

Generac (GNRC) is yet another steady grower. With share price 50% above its mid-May low, this is another key ingredient in making Werner’s portfolio one of the best mutual funds.

Shares initially sold off heavily after earnings were reported on Wednesday. But nearly the entire pull back was erased as investors realized that second-quarter 2021 results, both revenue and earnings, beat expectations on an adjusted basis. EPS jumped 71% on strong demand.

Increasing demand should continue, Werner says. More homes rely on rooftop solar panels, making them vulnerable to localized disruptions, he says. The ongoing roll out of 5G telecommunications increases the need for backup power at an increasing number of towers. The U.S. electric grid is unreliable. And natural disasters can burn or damage electric grids. “If you want uninterrupted electricity at home, it’s more and more important to have your own solution” in the form of a backup generator, Werner said.

He added, “So Generac benefits from the renewable energy trend and from the aging U.S. energy infrastructure, topped by natural catastrophes.” Generac has about 1% of California’s residential standby generator market. If it could boost that to its 5% national penetration rate, it would additional revenue of more than $2 billion, Werner says.

Nvidia (NVDA) is another dynamic growth company, although it is in the later, core life cycle stage. The company’s fast computer chips have become vital to advanced applications, from computer graphics to autonomous driving and data centers. In addition, its CUDA software development platform is widely used. The stock is a mainstay of Capital Growth’s bid to stay one of the best mutual funds.

Share price volatility in the past month is due to investor concerns about how much Nvidia sales depend on demand from cryptocurrency miners. “Cryptocurrency mining is very volatile,” he said. To clarify how much demand is from the steadier gaming market, Nvidia is providing crypto miners with their own chips rather than chips also used in gaming.

Werner’s bottom line? After the recent rally in share price and concerns about being able to supply both gaming and crypto mining demand, “we think there may come a better tactical point to be buying or adding to the position,” he said.

By The Numbers: One Of The Best Mutual Funds

Capital Growth became an IBD Best Mutual Funds Awards winner by topping the S&P 500 in 2020 and in the three, five and 10 years ended Dec. 31. 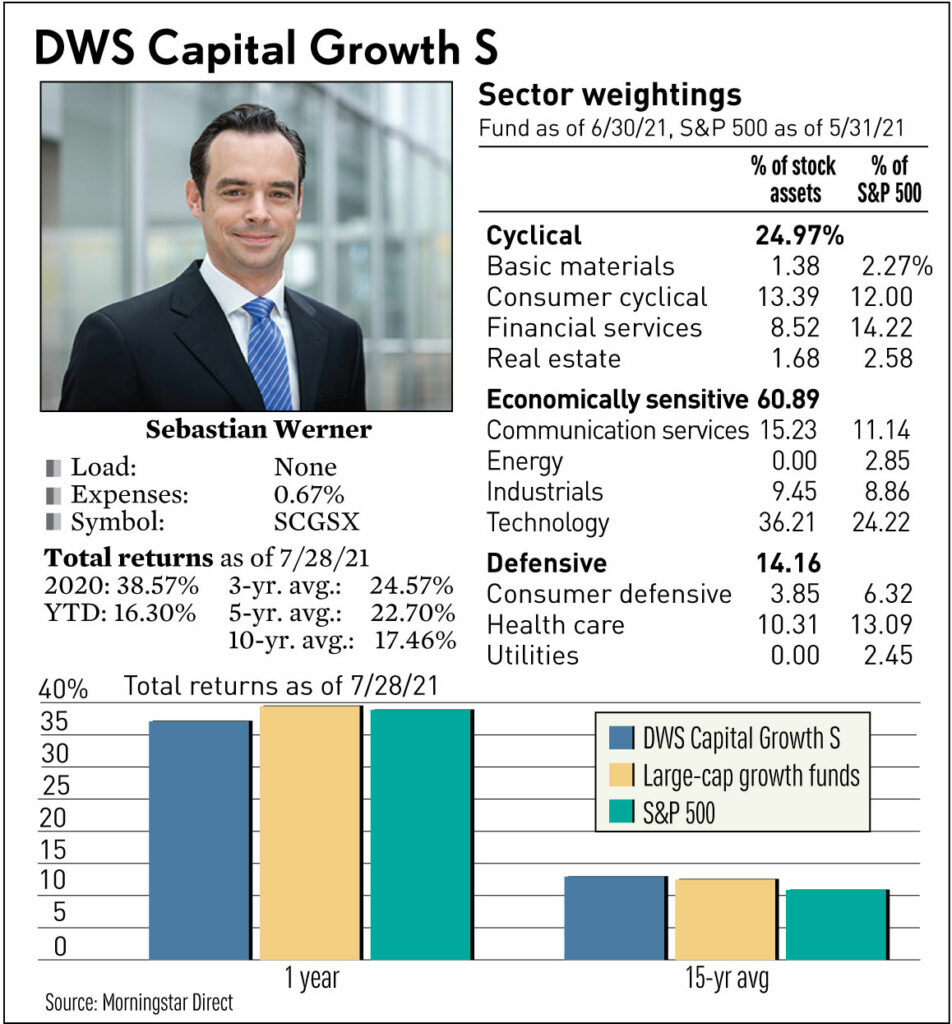 Follow Paul Katzeff on Twitter at @IBD_PKatzeff for tips about retirement planning and actively run portfolios that consistently outperform and rank among the best mutual funds.

You Need This Much Retirement Savings At Your Age And Income

How Long Will Your $1 Million Last In Retirement?

Which Stocks Are Breaking Out Or Near A Pivot Point? Check MarketSmith

According to monthly data issued by the Association of Mutual Funds in India, net positive inflows to equity mutual funds...

After diversifying to the US markets, Indian investors had sometime back taken a fancy to the Greater China region, comprising...

The $706.9 billion Thrift Savings Plan, the retirement plan for 6.6 million federal employees and members of the uniformed services,...