What can you learn about stock picking from one of the best mutual funds? Like, should you underweight Tesla (TSLA)? You be the judge.

Manager Holly Emerson details stock picks that show how the fund is playing the Biden Administration’s push for infrastructure upgrades.

And McMahon explains how the fund has aimed to benefit from the pullback in the maker of Ugg boots and Hoka One One running shoes.

Those stock moves and others come as the portfolio, one of the best mutual funds, is boosting its focus on large-cap growth.

Here’s what’s going on. The fund used to rely on quantitative tools to pick stocks in its namesake target area. Basically, that meant reliance on mathematical models that predict stock behavior to pick buys and sells.

But in August, the fund began to combine quant tools with traditional fundamental analysis. Since then, the fund “has more concentration, fewer names and lower turnover than a quant-only strategy would have,” said McMahon, who is also chief investment officer for active equities of Charles Schwab Asset Management.

Taking A Bite Of FAANG Stocks

The idea, of course, is to help this portfolio remain among the best mutual funds. How? For one thing, more concentration means less dilution of the total return benefit to the fund by each holding that outperforms.

For another thing, lower turnover can reduce taxable capital gains and distributions, for shares held in taxable accounts.

Overall, the shift to a blended strategy should make it easier for the fund to invest in large-cap growth stocks. “We found that quant models tend to favor small names and value names,” said manager Emerson. “For a large-cap growth fund, that’s a bit difficult to work with.”

So, at least in theory, the managers should be able to put more of their shareholders’ money to work in the big growth names that have led the market for much of the past few years and characterized portfolios among many of the best mutual funds.

What about the fund’s plays on various macro trends, within the fund’s overall bottom-up approach? How can those help Large-Cap Growth defend its spot among the best mutual funds?

One such holding is Parker-Hannifin (PH), which makes machinery to control motion, flow and pressure. It would likely benefit from a successful push by President Joe Biden for an infrastructure bill, Emerson says. “We have an overweight in it,” she said. “We believe that will help us take advantage of the infrastructure bill.”

In consumer discretionary, one stock the fund likes is Deckers Outdoor (DECK). The stock was 24% off its Nov. 18 high, going into Wednesday. The company sells Ugg boots and Hoka One One running shoes. “Hoka has been a good growth driver,” McMahon said. “The stock (Deckers) has come down recently, as has the whole consumer discretionary sector. So that’s one name we think is pretty attractive at these levels.”

In consumer staples, the fund likes Constellation Brands (STZ). “Constellation Brands has a good number of premium brands,” McMahon said. “Corona and Modelo are two (of its premium beer labels). We’re overweight (in that stock) relative to the benchmark. And we like the beverages sector generally. There’s good pricing power there. And we like the premiumization of beer.”

The best way to use the Composite Rating is to watch for stocks that have 90-plus scores and are forming bases or are in follow-on buy areas. That way, you spot the best-positioned stocks before they start big price runs. Look up a stock’s Composite Rating at IBD Stock Checkup.

Tesla: What This Fund Likes, Dislikes

Many other holdings have stronger CAN SLIM credentials. Those should be poised to help Large-Cap Growth stay in the winners’ circle of best mutual funds. Tesla has a 99 Composite Rating. Also, it’s a member of the IBD Leaderboard and the IBD 50.

Elon Musk is former CEO of Tesla and now its “Technoking.” “Elon Musk is pretty volatile on his own,” Emerson said in response to a question citing Tesla’s volatility since early November. “But with Biden passing his infrastructure bill and focusing on green energy, that makes Tesla look really good.”

Still, Tesla has had problems with production and has not always met its unit production forecasts, Emerson says. “So it’s an underweight for us,” Emerson said. “We don’t want to take too much risk in terms of not holding it at all. But because it’s so expensive, we have an underweight relative to the (Russell 1000 Growth Index) benchmark.”

By The Numbers: One Of The Best Mutual Funds

Schwab Large-Cap Growth became an IBD Best Mutual Funds Award winner by topping the S&P 500 in 2020 and in the three, five and 10 years that ended Dec. 31. 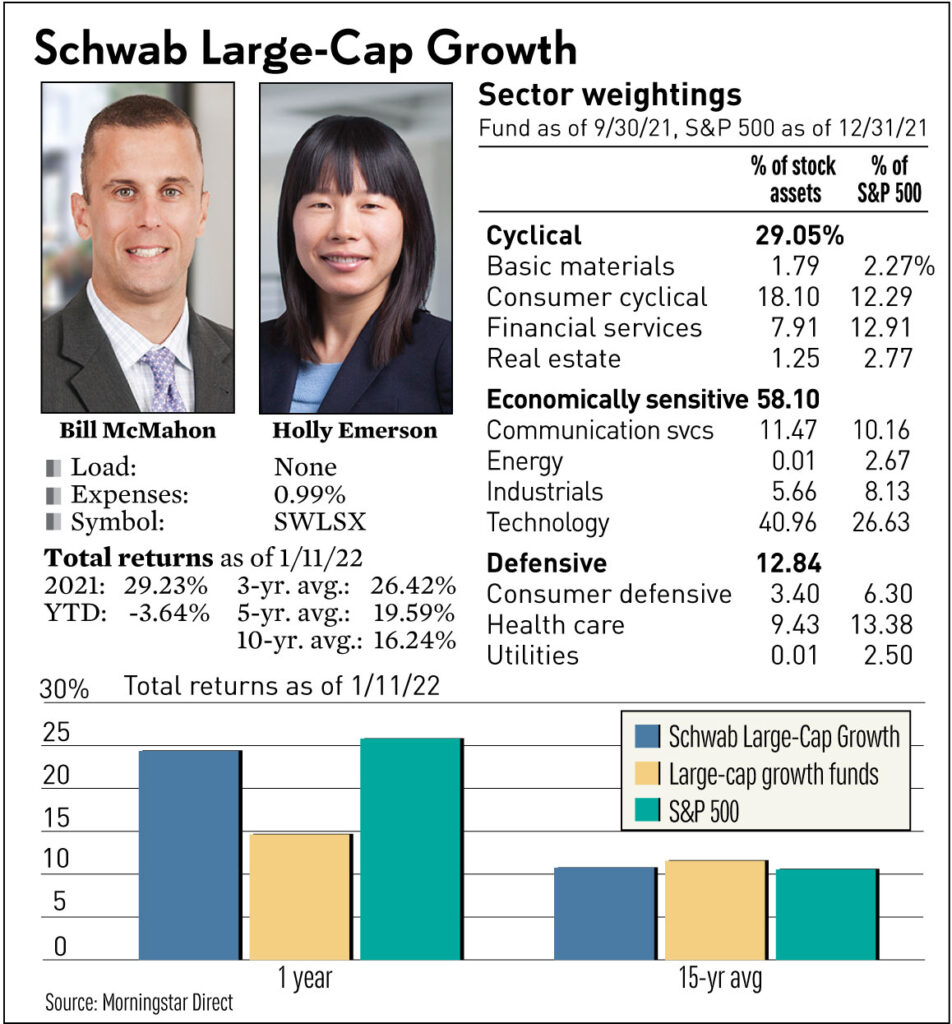 As I write this, Groundhog’s Day isn’t for another week or so. However, the Federal Reserve certainly seemed to signal...

JPMorgan is about to make a nearly $10 billion splash in the exchange-traded fund space.The firm will begin converting four...

Most mutual fund investors are waiting to see whether the finance minister would raise the Section 80C limit in this...

Worried about your investments in overseas funds?

Overseas mutual fund Investors, especially those who have investments in US-based funds, are worried about their investments. Since most of...