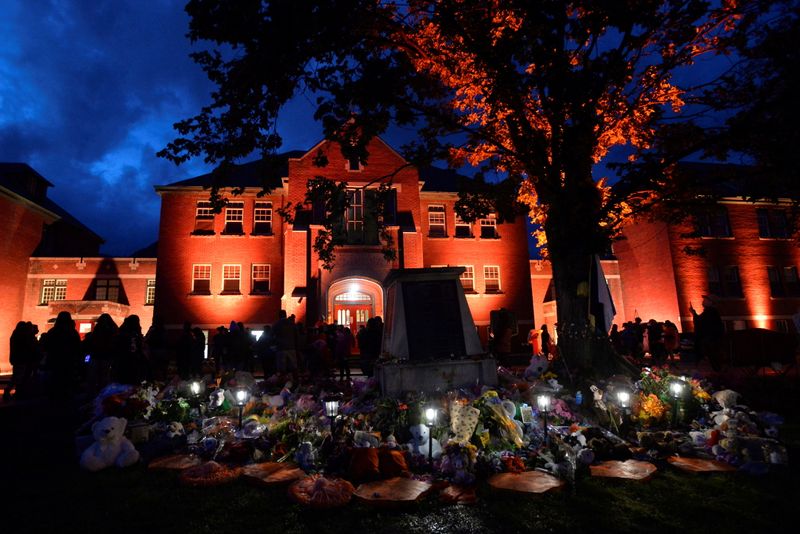 © Reuters. FILE PHOTO: A makeshift memorial grows on the grounds of the former Kamloops Indian Residential School after the remains of 215 children, some as young as three years old, were found at the site in Kamloops, British Columbia, Canada June 5, 2021. REUTERS

TORONTO (Reuters) – Canada has reached a proposed settlement with a group of indigenous survivors of the now-defunct residential schools for the abuse they suffered, a federal minister said on Wednesday, ending a 14-year fight for justice.

The settlement comes as the government is scrambling to deal with a national outcry after the remains of 215 indigenous children were discovered at a former residential school in Kamloops, British Columbia. The government has been under pressure to stop legally opposing indigenous people’s requests for compensation and acknowledgement in court following the discovery.

Under the latest agreement, the government will provide C$10,000 ($8,259.00) to each survivor involved in the class action lawsuit and create a C$50 million indigenous-led nonprofit to support wellbeing and cultural learning.

The settlement does not include an explicit admission of wrongdoing by the government. Crown-Indigenous Affairs Minister Carolyn Bennett said the plaintiffs had hoped for an official apology and “while this is not part of a settlement agreement, we will be listening to their concerns, as we work together on this request.”

Between 1831 and 1996, Canada’s residential school system forcibly separated about 150,000 indigenous children from their parents, bringing them to institutions with the stated purpose of assimilation. They were malnourished, beaten and sexually abused in what the Truth and Reconciliation Commission called cultural genocide in its landmark 2015 report.

The proposal is open for comments from plaintiffs until August 2021, and will be presented along with the comments to the court in September for approval.

Bennett told reporters at a Wednesday news conference that the government will continue to work with survivors and their families and others to resolve remaining childhood claims.

“Together we will move forward on the path to reconciliation,” she said.

CANADA IS A “REPEAT OFFENDER”

Several plaintiffs spoke at the conference, describing the pain the residential schools and the years-long lawsuit brought them.

“This has been a really long process, 14 years, returning to court, regurgitating trauma,” Charlotte Gilbert, a representative for the plaintiffs in the class action lawsuit, said.

“No amount of compensation can change the legacy of residential schools,” Diena Jules, a survivor of the schools, said. “Nothing can restore us to being whole.”

The government remains embroiled in several ongoing lawsuits involving indigenous people in Canada. A Canadian Human Rights Tribunal case involving discrimination through the systemic under-funding of child and family services against indigenous children – resulting in a disproportionate number of indigenous children in foster care – has a hearing next week.

The Canadian government has admitted its child and family services funding system “was broken and needed immediate and substantial reform.” But in its most recent filings it argued the tribunal was the wrong venue for this dispute and that individual compensation was not appropriate in this instance.

“It’s a really dangerous argument,” said Cindy Blackstock, a member of the Gitxsan nation and executive director of the First Nations Child and Family Caring Society, which brought the legal action.

Canada is “a repeat offender” when it comes to abrogating the rights of indigenous children, she said. “It needs a heavy hand for deterrence.”

2/2 © Reuters. FILE PHOTO: The Tesla logo is seen on a car at Tesla Motors' new showroom in Manhattan's...