Cathay Financial Holding Co’s (國泰金控) shareholders on Friday approved the company’s proposal to raise up to NT$50 billion (US$1.78 billion) in new capital to fund future mergers and acquisitions (M&As).

The financial conglomerate plans to issue fewer than 1 billion new shares to raise funds at an appropriate time, it told shareholders at an annual general meeting in Taipei. 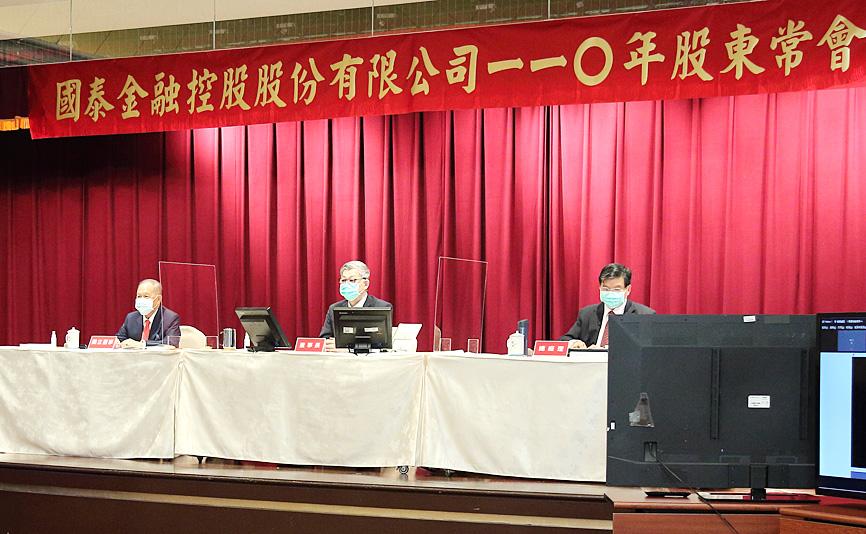 “There is still tremendous room for expansion,” he said.

Cathay Life Insurance Co (國泰人壽) last year posted a loss of NT$8.8 billion from an investment in Indonesia’s PT Bank Mayapada Internasional Tbk, but Lee said that it “was only an isolated case” and would not restrict the company’s investment in Southeast Asia.

However, the spread of COVID-19 infections has limited cross-border movement, as well as slowed the company’s onsite review and due diligence regarding target companies, Lee said.

The pandemic has had different repercussions on various industries and countries, but it has also revealed some favorable M&A opportunities for the firm, he added.

Cathay United Bank has had a decline in lending and wealth management demand due to COVID-19, but the pandemic’s impact on the Taiwanese economy is likely to diminish as the vaccination rate rises and stricter anti-virus measures are lifted, Lee said.

Sales in Cathay Life Insurance are expected to improve in the second half of the year as the government plans to lower a level 3 COVID-19 alert to level 2, which would allow the company’s sales agents to visit clients in person, he added.

“As the COVID-19 pandemic has been predicted to become a seasonal illness like the flu, we expect the virus’ impact on the global economy to decrease,” Lee said.

Nonetheless, CTBC Financial Holding Co (中信金控) chairman Yen Wen-long (顏文隆) told the company’s shareholders on Friday that the global economy is yet to face challenges this year, as the difficulty of forecasting the pandemic’s development is likely to mean high volatility in financial markets.