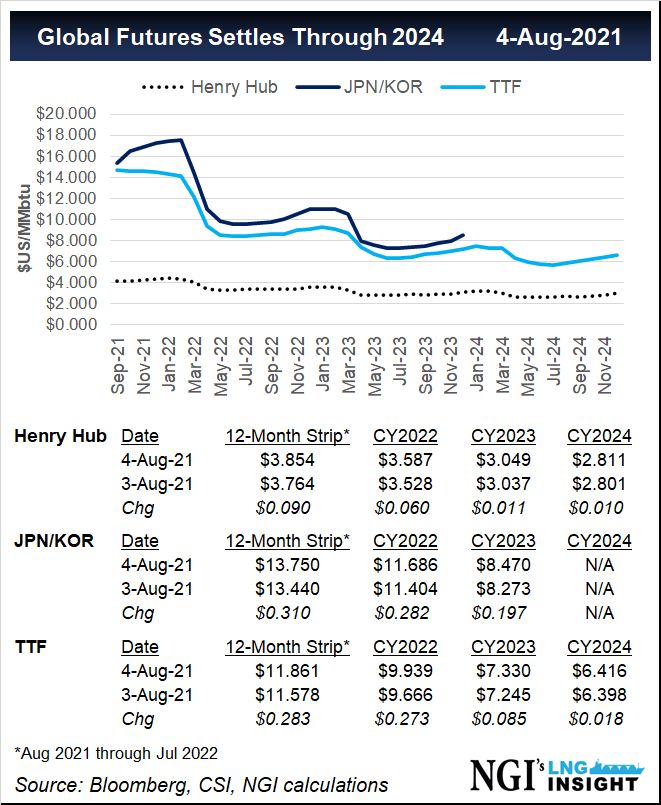 The largest U.S. gas exporter loaded 139 cargoes, or 496 TBtu of LNG, in the second quarter. Results shattered a previous record of 133 cargoes set in 1Q2021 and were up from the 78 cargoes exported during the same period last year.

An improving outlook for the global gas market prompted Cheniere to revise its 2021 financial guidance upward. The company is now guiding for distributable cash flow of $1.8-2.1 billion, compared with the previous range of $1.6-1.9 billion.

“The continued strengthening of the LNG market is yielding higher netbacks on open volumes,” said CEO Jack Fusco. “For context, since our first quarter earnings call in May, spot margins doubled and our portfolio optimization team has been able to capitalize on that with our open volumes.”

The company has continued to debottleneck production through maintenance optimization and churn out higher volumes from its trains at the Corpus Christi and Sabine Pass terminals. It anticipates producing extra LNG through the second half of the year.

Cheniere has also had success this year signing fixed-fee LNG sales agreements with multiple buyers for its excess volumes. The deals total 12 million metric tons of LNG to be delivered between 2021 and 2032, further underscoring “the strength in the LNG market today,” Fusco said.

“We will continue to place these flexible volumes in the market and tailor solutions to meet the growing requirements of LNG customers worldwide,” he added during a call Thursday to discuss second quarter results.

A cold winter that spilled into the spring and left natural gas inventories tight in Europe and Asia forced buyers to bid up prices for restocking. The trend has continued because of high cooling demand across the Northern Hemisphere this summer. Stronger-than-normal demand in South America amid a drought and global LNG production disruptions have also left the market short of cargoes.

Fusco said Asia was the top destination for Cheniere’s cargoes during the quarter, accounting for 45% of its volumes. The forward curve shows Japan-Korea Marker prices well above $15/MMBtu through the end of year. European prices are also high, trading slightly below $15 over that time frame. Europe accounted for 35% of Cheniere’s second quarter cargoes, while 20% of its volumes were delivered to Latin America.

Despite the stronger market, Cheniere reported a second quarter net loss of $329 million (minus $1.30/share), compared with net income of $197 million (78 cents) in the year-ago period.

The loss came as the company’s commodity price exposure has increased under gas supply agreements (GSA) in place with Apache Corp., EOG Resources Inc. and Tourmaline Oil Corp. Cheniere inked its latest GSA with Tourmaline in July. Under the deals, Cheniere buys natural gas at prices linked to JKM, subjecting it to commodity price fluctuations that its LNG buyers typically assume under long-term offtake agreements.

Cheniere took a $591 million noncash loss primarily related to changes in the fair value of commodity prices under the GSAs and forward sales of LNG. The loss impacted its second quarter results.

While Cheniere buys U.S. and Canadian natural gas at prices linked to the Asian benchmark, it deducts fixed fees for liquefaction and shipping that offset the risks. Still, the company stressed that it would more often be subjected to commodity fluctuations now that it has more of the so-called integrated production marketing (IPM) deals with the producers on its books.

“The long-term duration and international price basis of our IPM agreements make them particularly susceptible to fluctuations in fair market value from period to period,” management stated.

Cheniere’s marketing arm sells the LNG it produces from the gas supplied under the IPMs into the open market. The GSAs could also eventually help support an final investment decision (FID) on an expansion at the Corpus terminal in South Texas.

The company is still working on securing longer-term offtake deals for the Corpus project that could add up to seven midscale trains with a capacity to produce 10 mmty. An FID is still pending.

“We will maintain our discipline to help ensure that the risk and return profile is consistent with that of the first nine trains we built,” Fusco said of the project.

A sixth train at the Sabine Pass terminal in Louisiana is 90% complete and expected to enter service in the first half of next year. Early commissioning activities have begun with the first fuel gas introduced in July.Cheniere also said Thursday that it has published a peer-reviewed LNG life-cycle assessment (LCA) study in the American Chemical Society Sustainable Chemistry & Engineering journal. The LCA would be used to estimate greenhouse gas emissions (GHG) for its cargo emissions tags. The company plans to offer the tags beginning next year to measure the GHG data of each cargo loaded at its terminals.