Chinese tech IPOs in US rebound after two-month lull

HONG KONG — Chinese technology companies are flocking to New York for initial public offerings once again, reviving a record-setting flow that had slowed after a streak of weak openings amid shaky markets.

Cargo platform Full Truck Alliance, backed by Tencent Holdings and SoftBank Group, is set to finalize pricing for its IPO to raise up to $1.57 billion on Monday and then begin trading on the New York Stock Exchange the next day.

It will follow on the heels of AiHuiShou International, an internet platform for selling used consumer electronics backed by online retailer JD.com, which raised $227 million and closed 22.9% higher on its debut on the NYSE on Friday even as the S&P 500 dropped 1.3%. A week earlier, Kanzhun, operator of the online recruitment platform Boss Zhipin, saw its shares nearly doubled on launch on the Nasdaq Stock Market after raising $912 million.

Chinese ride-hailing service Didi Chuxing is meanwhile holding preliminary investor meetings for what is shaping up to be a $10 billion New York IPO, according to people familiar with its plans. A further 20 companies, including online grocers Dingdong Maicai and MissFresh and hotel operator Atour, are preparing for offerings that could together raise around $6 billion.

“The momentum is back,” said a person involved in one of the transactions. “Investors are warming up to Chinese tech players once again. A few strong debuts can propel the volumes higher. [Kanzhun] vindicated our belief that the slump was temporary and investors remain eager to lay their hands on fast-growing companies from China.” 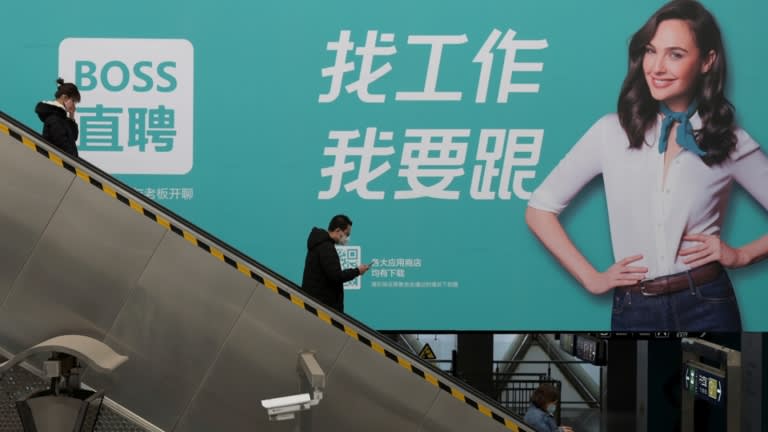 The revival of Chinese IPO flows to the U.S., despite high tensions between Beijing and Washington, is driven by a desire to tap the deep pools of liquidity offered by the world’s largest capital market.

U.S. exchanges, which are home to the largest technology companies in the world, can offer tech companies higher valuations as investors there may better understand their business models.

“Innovative companies dominate the U.S. market and investors have more understanding of new concepts and new tech startups,” said Edward Au, Deloitte managing partner for southern China. “So more tech startups choose to do IPOs in the U.S. first and then come back to Hong Kong for a second listing.”

Technology companies have also been favoring U.S. markets since Chinese authorities tightened criteria for listing on Shanghai’s STAR Market to screen out companies without innovative technologies. More than 90 companies have withdrawn IPO applications in the mainland this year, according to filings.

For investors sitting on cash thanks to the global stimulus, Chinese companies offer exposure to one of the fastest-growing markets in the world. International backers of tech companies also prefer offshore listings to realize gains on their pre-IPO investments, said Philippe Espinasse, founder of consultancy P&C Ventures and former head of equity capital markets at Nomura.

Chinese companies “see having a global focus as one of the best options to achieve stability and consistent revenue,” said Ivy Wong, who heads Baker McKenzie’s Asia-Pacific capital markets practice. “Listing in the U.S. market can provide them with that access to new markets and customers, not to mention the usual benefits such as the broad investor base.” AiHuiShou priced its shares in the middle of their marketed range, though it had closed its order books a day early due to strong demand, according to two people familiar the deal. Full Truck Alliance, also known as Manbang Group, has attracted commitments from Ontario Teachers Pension Plan and Emirati sovereign wealth fund Mubadala. The company also closed its order books a day earlier than planned.

Dingdong and MissFresh each are targeting about $500 million from their IPOs while Atour is seeking around $350 million, people familiar with the deals said.

With equity markets rebounding and investors setting aside worries about a flare-up in global inflation, the likes of bike-sharing platform Hello, Full Truck rival ForU Worldwide and podcast startup Ximalaya have revived New York IPO plans. These companies earlier completed pre-marketing of their offerings and were waiting for a favorable market environment to launch the share sales, according to three people close to the transactions.

The flurry of deals is likely to bring the year’s total for Chinese companies in New York to well over last year’s $13.5 billion haul, which according to Dealogic data was the highest total since 2014’s record $29.1 billion. That bonanza stemmed from Alibaba’s $25 billion NYSE IPO.

Ahead of AiHuiShou, 29 Chinese companies had raised $5.9 billion in New York during 2021, according to data from Dealogic. In the same period last year, 14 companies collected $2 billion.

Issuance, though, slumped this past April and May to just $645 million amid an antimonopoly crackdown on the technology sector in China and waning investor risk appetite. 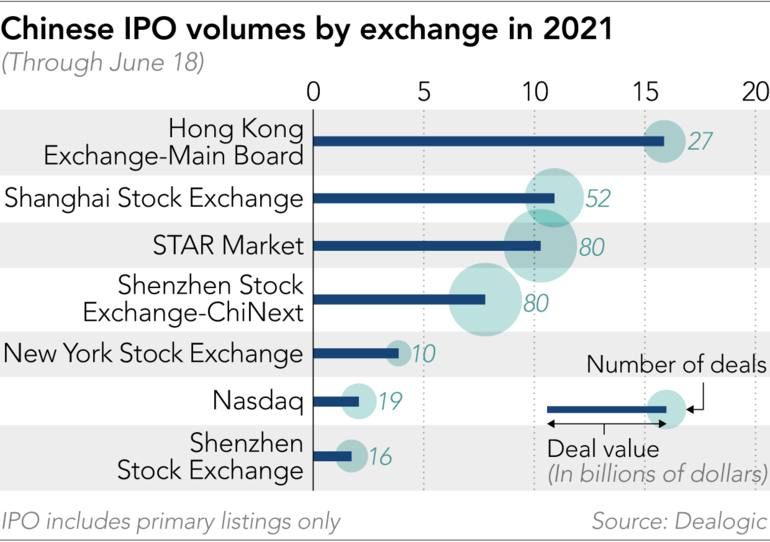 Under a law passed last year, Chinese companies risk being kicked off American exchanges by 2023 if U.S. regulators are not permitted to review their audit records. Beijing forbids such reviews on national security grounds. The U.S. Securities and Exchange Commission last month began steps toward putting the law into force.

Late last month, U.S. Sens. Marco Rubio and Bob Casey introduced the “No IPOs for Unaccountable Actors Act” to prohibit further Chinese IPOs. If passed, the law would direct the SEC to stop any company that cannot comply with U.S. accounting rules from listing on a U.S. exchange directly or via a special purpose acquisition company (SPAC).

“The benefits of a U.S. listing still far outweigh the risks from a forced delisting, if it were to eventuate at all,” said a person involved in the First Truck Alliance offering. “It gives exposure to a wide investor base and also sets the tone for a globally accepted valuation, which can be used as a benchmark for listing elsewhere.”