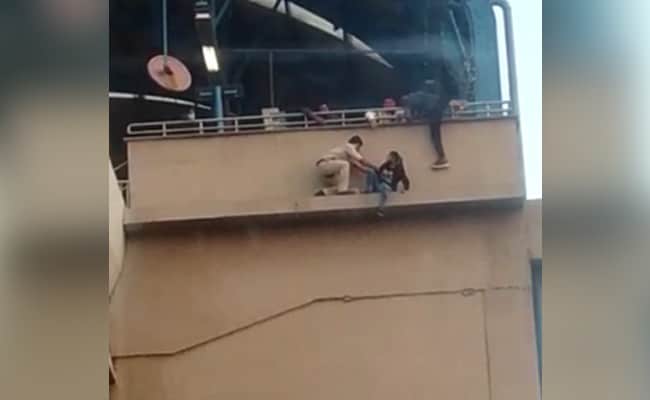 A CISF jawan who saved the life of a 23-year-old woman, who was attempting suicide at a Delhi Metro station in Faridabad recently, has been honoured with a cash reward and commendation letter by the force’s director general (DG) on Monday.

Constable Nandlal Ram was monitoring CCTV footage at the Sector 28 station in Faridabad on the evening of July 24 when he was alerted by the visuals of a woman dangerously sneaking through the parapet wall of the 40-feet high platform on to the narrow ledge exposed towards the road below.

Amateur social media videos of that day showed the woman sitting on the ledge with her legs dangling towards the road.

“The lady seemed to be on the verge of trying to jump on the road in an obvious suicide attempt,” a spokesperson for the paramilitary force said.

“CISF personnel and some other civilians who were gathered there tried to dissuade her from the suicidal act and tried to distract her,” the spokesperson said.

Constable Ram, who had rushed to the spot, quickly walked up to the lady and got hold of her before she could have taken an extreme step, he said.

The woman, who resides in Delhi, was pushed back to the platform with the help of a commuter.

“Due to quick presence of mind and display of raw bravery and courageous act of constable Ram, a suicide attempt was averted,” the spokesperson said.

(Except for the headline, this story has not been edited by NDTV staff and is published from a syndicated feed.)