Could This Real Estate Partnership Save Zillow?

Zillow (Z 4.64%) (ZG 4.31%), the largest online real estate listing platform, has been absolutely crushed this past year. After the company announced it was expecting to lose hundreds of millions of dollars in its failed attempt at iBuying last November, share prices fell 31% in two days. Followed shortly thereafter by the tech stock crash, Zillow sits down 66% today.

Some investors were losing faith in a comeback for Zillow, but could its latest announcement for a partnership with its previous competitor, Opendoor (OPEN 2.97%), be just what the company needs to save it? 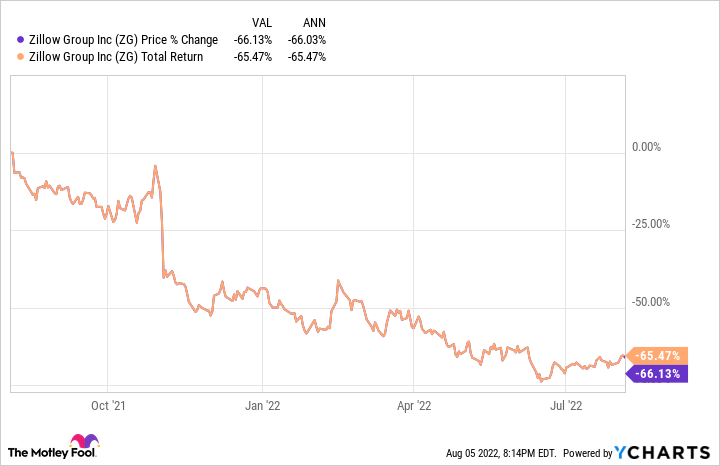 Here’s what the partnership means and why it could be a smart move for Zillow over the long haul.

On Aug. 4, Zillow announced a multi-year partnership with Opendoor Technologies, one of the two biggest iBuying companies in the market today. The partnership will allow users to seamlessly get a quote from Offerpad directly on Zillow’s platform. The end user can then compare the quote to a suggested listing price from one of Zillow’s Premier Agents, getting their expert guidance on which path may be best for the home seller moving forward.

Why this partnership could be good for Zillow

Zillow openly touted its iBuying business as being the future of Zillow. So after it came to an abrupt end, investors were left in the dark about what its future might hold. This partnership with Opendoor allows Zillow to offer the benefits of iBuying to its users without being financially responsible for the risks associated with iBuying — which is a major pro.

Plus, it can be an additional income stream for the company, particularly if iBuying continues to gain momentum as an attractive way to sell a home. The company hasn’t disclosed the compensation model for their partnership, but Zillow will likely earn a percentage fee for every home Opendoor purchases through their referral.

Will it be enough to save it?

Zillow’s latest earnings exceeded analysts’ expectations, but its revenues fell short of last year’s. This isn’t great, considering we are entering a slowing housing market, and there’s still a lot of volatility in the market. The partnership with Opendoor should help the company, but it’s unlikely to be enough to change the trajectory of the company completely.

Zillow is a giant when it comes to online real estate platforms, with billions of visitors and users per month. But its business model is proving challenging to scale and keep consistently profitable. Zillow needs to find a way to capture and deliver more revenue-generating services to its users on a consistent basis, and it’s highly unlikely Opendoor’s partnership alone will do that.

Opendoor also faces its own set of challenges. The housing market is slowing substntially, making it increasingly difficult to price the future value of homes accurately. If Opendoor gets its estimations wrong and housing prices fall faster than expected, it could be put in the same money-losing position that Zillow was in several months ago.

All in all, this partnership could pay off for Zillow in the long run if iBuying takes off, but the current market could easily make iBuying fizzle as it faces its first big test.