SINGAPORE — The impact of the soaring prices of agricultural staples from wheat to vegetable oils to sugar over the past few months is now hitting consumers and businesses in Asia.

Food manufacturers are offloading higher prices to households, which is weighing on consumption and potentially subduing any economic recovery from the COVID-19 pandemic in some countries. Some exporters and farmers are, however, benefiting from the favorable market conditions.

The benchmark food price index published by the United Nations’ Food and Agriculture Organization (FAO) — which tracks the prices of meat, dairy, cereals, vegetables oils and sugar — rose for the 12th consecutive month in May to 127.1, hitting the highest level in nearly 10 years. May’s figure was 40% higher than a year ago.

A combination of several factors drove the price surge. Demand in China, one of the world’s biggest food importers, has been strong as the country has recovered from the pandemic at a faster rate than most of the rest of the world.

Higher marine shipping costs stemming from a shortage of containers and supply chain disruptions is another factor. The FAO also blamed supply-side issues such as harvest delays and reduced sugar cane yields in Brazil. 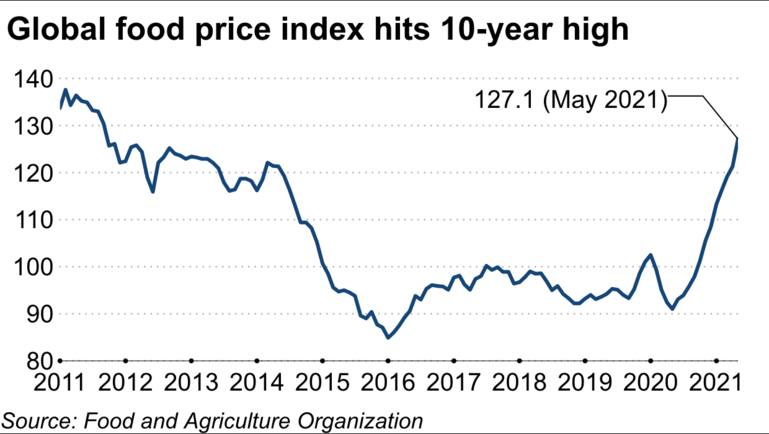 Moreover, commodities prices have been boosted by investment money flowing into the market as investors diversify risks amid high liquidity in the financial markets.

Against such a backdrop, Asian food manufacturers are hiking their prices to offset the higher costs of raw materials. Major food importers such as Japan, South Korea and China are seeing the impact.

Japanese flour miller Nisshin Seifun Group will raise the prices for wheat flour products for households by 2% to 4% in July. The company said it could not absorb the higher raw material prices as well as rising logistics and packaging costs. Food manufacturer Ajinomoto will also raise its mayonnaise prices by 1% to 10% next month, citing higher edible oil prices over the past few months. 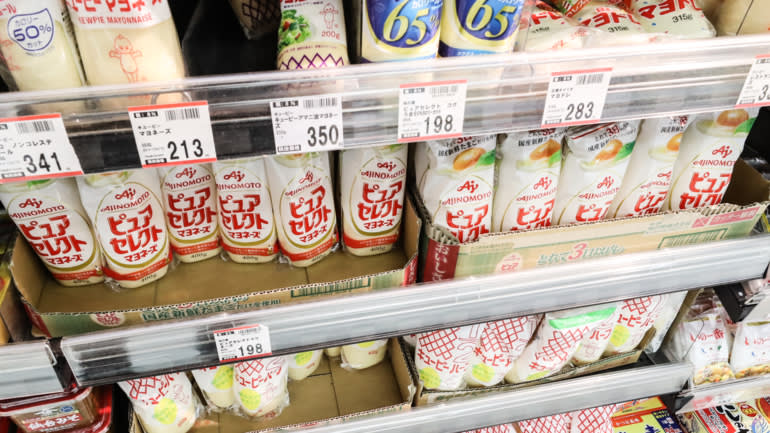 Food giant Ajinomoto will raise the price for mayonnaise by 1% to 10% next month. (Photo by Kosaku Mimura)

In South Korea, the largest bakery chain Paris Baguette raised bread prices by 5.6% in February as the prices of raw materials increased. In China, the prices of some local soybean cooking oils have increased by 20% in April, according to local reports.

Official consumer price data already show inflation in some countries. South Korea’s consumer price index rose 2.6% in May from a year earlier, marking the highest increase since March 2012, partly due to higher agricultural prices. Notably, the prices of food and nonalcoholic beverages rose 7.4% from a year ago. 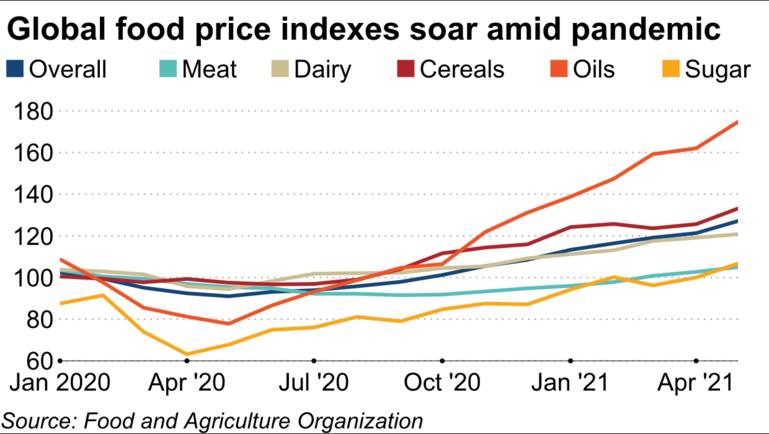 The Philippines has also logged high inflation this year, with May’s consumer price index rising 4.5% from a year earlier. Likewise, the prices of food and nonalcoholic beverages climbed 4.6%.

Lower income households and poorer countries will suffer more as they spend a larger proportion of their earnings on food, he said. These countries also have less access to COVID-19 vaccines and are hampered by limited fiscal resources that could help to cushion the negative impact of higher food prices.

Asia’s farmers and commodity exporters are set to gain from the price hikes, though. According to Thailand’s central bank, the country’s farm income — which does not include government subsidies — rose 14% in April from a year ago, due to “expansion in agricultural prices.” The country is one of the world’s biggest exporters of sugar and rice.

Singapore-based agri business trader Wilmar International’s net profit doubled to $450 million in the first quarter of 2021 from a year ago, thanks to higher sugar and palm oil prices. “The sustained high palm oil price is expected to benefit our oil palm plantation business in the coming months,” it said in late April.

However, a prolonged pandemic and the worsening infection numbers in some Asian economies will affect the supply and demand of food, complicating the outlook for prices. 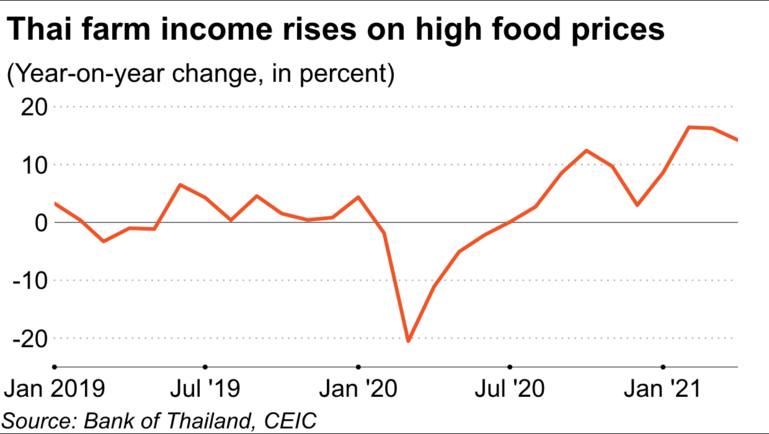 “Food prices may continue to rise because of supply chain disruptions and periodic lockdowns in agricultural-based developing countries,” said Chua of Maybank Kim Eng. One example is Malaysia, a key palm oil exporter. The country entered a nationwide lockdown from June 1 that closed factories as infection numbers soared.

On the other hand, the commodities futures market show the upward trend may have slowed down since late May. The price for wheat futures on the Chicago Board of Trade exchange had moved above $7.50 per bushel — equivalent to about 35 liters — in May but by early June, it was trading around $6.80. Futures prices for corn and soybean also performed similarly.

Given the uptick and subsequent fall in prices, Chinese authorities are paying greater attention to the commodities markets to prevent excessive speculation. An official from China Securities Regulatory Commission told reporters late May that the body would cooperate with other government departments to better control prices in the commodities market.