Investing in emerging markets is not for the faint-hearted, as recent sharp stock market falls in China have demonstrated. But it can be hugely rewarding for investors who are prepared to be patient and play the long game.

No emerging market encapsulates this better than India. Over the past decade, the country’s stock market index – the BSE Sensex – has tripled in value. Yes, its upward trajectory has occasionally been rudely interrupted by big global events such as the 2008 financial crisis and more recently the pandemic, but it has been one of the emerging markets’ stronger performers.

Yet there are experts – fund managers and investment advisers – who believe the Indian investment party has only just begun. They predict another decade of solid investment returns from Indian equities – on the back of a booming economy, a young workforce and greater international investment in the country (in part triggered by big multinational businesses wishing to reduce their dependency on an increasingly belligerent China). 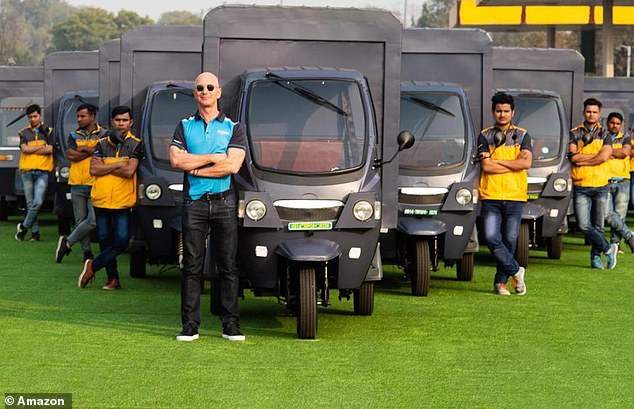 On the move: Amazon boss Jeff Bezos, with a fleet of electric rickshaws, is expanding in India

Brian Dennehy, managing director of investment scrutineer FundExpert, has been recommending India to clients since 2008.

Indeed, the stock market remains his top investment recommendation for the coming decade. He says: ‘A young population and a reform minded government headed by Narendra Modi can power the Indian economy for many years and decades to come.’ The latest global economic outlook report from the International Monetary Fund backs Dennehy’s view. It believes India will lead the world’s economic recovery this year and next.

Although the Indian economy shrank last year by more than five per cent as a result of the pandemic, the IMF says it is on course to rebound strongly – growing by 9.5 per cent this year and 8.5 per cent in 2022. No other economy, it forecasts, will grow by as much – not even China where the IMF says the respective growth figures will be 8.1 per cent and 5.7 per cent.

David Cornell is chief investment officer of London based Ocean Dial Asset Management which runs India Capital Growth, a £127million trust listed on the London Stock Exchange. Over the past ten years, the fund has generated shareholder returns of 151 per cent from a portfolio of between 30 and 35 stocks.

He describes India as a ‘compelling investment story’ as a result of a number of inter-connected factors – none more important than prime minister Modi’s determination to free up the economy.

Modi, says Cornell, is leading the way, driving through a series of reforms aimed at removing the bureaucracy which previously inhibited many businesses and discouraged competition. The PM has also simplified and reduced business taxes while signalling a big increase in infrastructure spending.

The economy, he adds, will also get a boost from the trend which has seen a shift of manufacturing from China to India. ‘Foreign investment in India is increasing all the time,’ he says. ‘Mobile phone giant Apple has said it plans to shift a fifth of its production capacity from China to India. Similarly, Samsung is looking to expand its operations at its Noida factory in Uttar Pradesh. Amazon and packaging company Procon Packaging are also investing in India.’

As well as concerns over China’s geo-political intentions, low wage costs – a third of those in China – are helping drive this investment in India. It’s a point made by Ramesh Mantri, senior analyst at White Oak Capital Management, a boutique investment house specialising in Indian equities and manager of fund Ashoka India Equity.

He says: ‘Anti Chinese sentiment is spreading across Asia and the world is waking up to the fact that it is too reliant on China as a manufacturer of goods. It now sees India as a perfect alternative, a large country with a low cost labour force.’

The composition of India’s economy is slowly changing, moving from its dependency on industries such as oil and gas, coal and commodities to embrace new technology – a shift given impetus by the pandemic and the need for the country to digitalise. This is seen as a positive for the equity market.

‘India doesn’t have well-established, stock market listed technology companies to match those in China such as Tencent and Alibaba,’ says Cornell. ‘But a new economy is slowly emerging.’ He points to last month’s listing of food delivery company Zomato as evidence of investor appetite for technology focused businesses. A wave of other private companies with a digital bent, among them logistics company Delhivery and online eyewear business Lenskart, are also looking to go public.

A young population – 50 per cent of India’s 1.3billion people are aged under 25 – with money to spend will help spur economic growth. Dzmitry Lipski, head of fund research at wealth manager Interactive Investor, believes the country’s young and well educated population is its ‘biggest asset’. He adds: ‘India’s middle class is expected to grow from around 50million today to 475 million by 2030. As they move to the cities, their lifestyles will evolve and their aspirations will grow, This in turn will drive consumer spending and generate economic growth.’

Mantri believes the Indian equity market is a dream for stock-picking fund managers. This is because of its size – there are more than 5,000 listed companies – the diversity of its constituents, and the fact that some companies are poorly researched.

This provides the opportunity to unearth companies that are seriously undervalued. The fund’s 65- strong portfolio is correspondingly skewed towards small and mid cap companies where share price inefficiencies are more prevalent. Over the past three years, the investment trust has generated a return of 66 per cent.

With India’s BSE Sensex stock market having enjoyed a good past year (up more than 50 per cent), it could be argued that a lot of good news is already priced into share prices. It’s a point Ocean Dial’s Cornell concedes. ‘Yes, the market has priced in a sustained economy recovery – and of course that could be stalled if Covid returns with a vengeance,’ he says. ‘But if you are prepared to take a five to seven-year investment view, and are happy to endure a few bumps along the way, India could be the place to invest a slice of your investment portfolio.’

PICK A TRUST OR TRY AN ASIAN FUND

Investment experts have their favourites. FundExpert’s Brian Dennehy is a fan of Goldman Sachs India Equity which he describes as a ‘consistent performer over the past five years’. Ben Yearsley, a director of Plymouth-based Shore Financial Planning, likes Alquity Indian Subcontinent and Ashoka India Equity.

Other advisers take a more pragmatic approach, recommending that investors opt for an emerging markets or Asian fund with limited exposure to India. Such funds, they say, offer country diversification.