Fintech Growth Stocks Don’t Come Much Safer Than This

In some cases, financial technology companies are attempting to revolutionize their industries, facilitating new ways of doing business. In other cases, fintechs are just competing for space in burgeoning areas of the economy and struggling to become profitable. In other words, fintechs come in all stripes, shapes, and flavors.

But if you are looking for a safe, established fintech with a history of massive growth and the potential for continued dominance, look no further than PayPal Holdings (NASDAQ:PYPL). 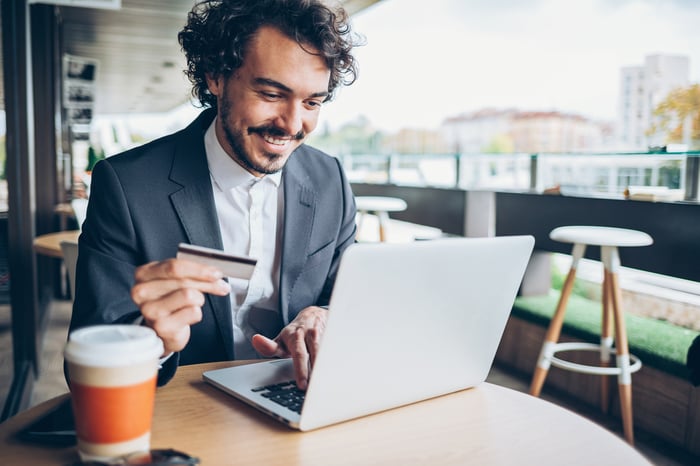 A dominant force in a growing industry

“Safe” is a relative term, as no company is truly exempt from the possibility of a negative performance. But among fintech growth stocks, few are safer bets than PayPal. Established in 1998, it could be considered the granddaddy of the digital payments industry. As of March 31, it had more than 392 million active users and a long history as an earnings machine.

PayPal checks off all the boxes you should be looking at when determining a safe fintech. For starters, it has a history of consistent revenue and earnings growth. Over the past five years, its earnings have grown at an annualized rate of 31% and revenue has increased by about 19% per year. On top of that, it is highly efficient, with a 23% profit margin and a 29% return on equity. At the end of the first quarter, it had $19.1 billion in cash and cash equivalents, with $8.9 billion in debt. Further, it grew its free cash flow 27% to $1.5 billion. All of that leaves it well equipped to weather difficult periods and invest in growth.

The company is coming off its best quarter ever, as revenue in Q1 jumped 30% to $6 billion, thanks to a 50% increase in total payment volume (TPV) on its platforms. Mobile payments app Venmo accounted for $51 billion of the $285 billion in TPV — a 63% year-over-year increase. In all, it added 14.5 million net new accounts in the quarter. As the market leader in the digital payments industry, PayPal has been lifted by the ongoing shift to digital payments, a trend accelerated last year by the pandemic.

In addition, it is the market leader in online payments with a huge network of users — 392 million at last count — and brands that are synonymous with their functions. That gives it a huge competitive edge and makes it difficult for rivals to gain market share. Combined, these factors all contribute to PayPal’s strength and stability.

The future is bright

Since it spun off from eBay in 2015, PayPal’s stock has posted an average annualized return of about 41%. But there are a few key reasons why PayPal should be able to continue to grow for years.

First off, it’s the market leader in an industry that is expected to experience huge growth over the next decade. According to a recent report from PricewaterhouseCoopers, the volume of digital payments worldwide is expected to grow by 80% by 2025 and triple by 2030.

Also, PayPal has been busy expanding its capabilities to meet the evolving needs of this market, first through Venmo, one of the leaders in mobile payments, along with Square‘s Cash App. Also, PayPal has come out with a Venmo credit card with Visa, and it’s now allowing customers to buy, hold, and sell cryptocurrencies on Venmo.

In addition, it rolled out QR code payment capabilities for both PayPal and Venmo for in-store purchases. On the first-quarter earnings call in May, CEO Dan Schulman said more than 1 million merchants were already using it. And more innovations are coming: Schulman said that the company plans to introduce its “next-generation digital wallet” in the third quarter.

Its most recent move was to launch Zettle, a digital point-of-sale platform that allows small businesses to accept payments, both in person and online. The platform also has tools that allow retailers to manage sales, inventory, reporting, and payments. It’s targeted to compete with Square’s suite of products for merchants.

These initiatives will all serve to expand PayPal’s addressable market in the years to come, which means it should have a lot more room to grow in what is expected to be a booming industry. With its earnings power, financial stability, and brand recognition, it should maintain a competitive advantage and be a safe bet for stellar long-term growth.