The collapse in global exploration and production (E&P) spending last year ranked among the worst downturns in history, but 2021 is the beginning of a multi-year recovery that will accelerate into 2022 and beyond, according to Evercore ISI. 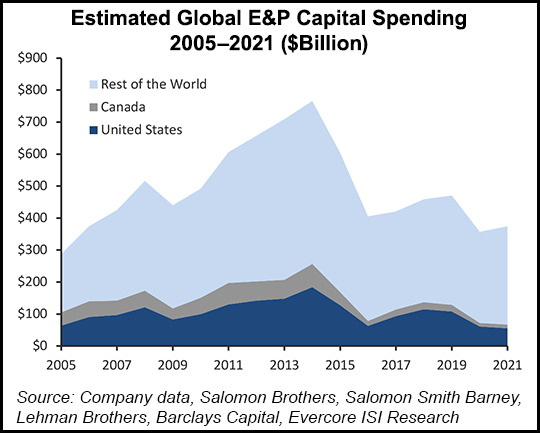 The firm’s Global E&P Mid-Year Spending Outlook indicates U.S. producers remain a bit cautious regarding their capital expenditures (capex) plans. However, as Henry Hub natural gas and West Texas Intermediate (WTI) prices strengthen, E&Ps could increase their spending into the last half of this year.

The mid-year forecast, completed in May, is an update of Evercore’s annual survey published last December. Like the initial survey, the update provides insight into about 250 producers that work around the world, including the energy majors, independents and the privates.

As the pandemic eased last winter, E&Ps were a bit more positive about their 2021 spending plans. However, “despite the improving macro backdrop, our 2021 global capex growth is being revised slightly lower,” said the Evercore team led by James West.

“The U.S. economy may be roaring, but the E&P operating base is contracting as the result of consolidation, bankruptcies and dissolution. Internationally capex growth is mixed, with select regions such as Europe and the Middle East accelerating, while a bit more modest growth is anticipated for Latin America and Russia.”

The “new multi-year recovery is starting slightly slower, but from a higher base.” Overall, global upstream capex is set to climb by 5% from 2020, about 200 basis points (bp) lower than the 7% anticipated last December.

“The final outcome may end up being somewhat better, however, with select U.S. operators showing a willingness to modestly increase spending in the second half of the year for corresponding increases in the oil price,” West said.

While this year’s spending plans may appear modest by historical comparisons, more than half of those surveyed (55%) look to boost capex by about 15% on average in 2022.

The average price outlook for spending in 2022 is based on price forecasts of $59/bbl WTI and $2.80/Mcf Henry Hub.

With current spot oil prices near the upper end of the $50-75/bbl range cited by E&Ps for 2022 capex, analysts said there is “upside bias” for capex to go higher beginning in the second half of this year.

“Similarly, the average Henry Hub gas price of $2.80 for establishing 2022 capex is below the current spot price of $3.10/MMBtu, which is in the lower half of the $2.50-4.00/MMBtu range for setting 2022 budgets and suggests there could be upside to gas-directed capex as well.”

Even with the pullback following the pandemic last year, spending by the North American E&Ps is set to decline overall by 6.5% in 2021. That is close to a “1,400 bp reversal from the 5.4% growth suggested by our December survey,” West said.

Canadian capex has stabilized near current levels at 3% forecast growth for 2021, which is unchanged from the initial survey. However,  U.S. capex is seen contracting “for a third straight year and for the fifth time in the last seven years due to a combination of consolidation, bankruptcies and corporate dissolutions,” West noted.

The U.S. E&Ps are set to spend less than one-third of the level they spent in the 2014 peak, with Canada at about 16% of capex that year. Spending plans had retreated sharply last year as Covid-19 collapsed demand, and E&Ps prioritized liquidity. Even with better economic conditions, E&Ps appear skittish about raising their capital budgets.

“A restructuring cycle among public E&Ps gave way to a smaller and less fragmented industry, but is now largely complete with the emergence of stronger regional majors and independents,” West said of the North American market.

Excluding historical capex, which includes distressed companies since acquired or privatized, U.S. spending should fall by “a relatively modest 1.2% in 2021,” with Canada capex up 21%.

Notably, however, the U.S. producers, both the independents and the majors, are holding the line on spending.

Private E&Ps make up around 9% of total U.S. capex but “half of the well count” in the Evercore survey, which means their spending outlook is an important variable. Figuring out the privates’ spending plans, however, is more difficult, though.

Based on Evercore intel, the U.S. privates have curtailed 2021 spending cuts “to a modest 2%” from initial estimates to trim capex by 6%.

Surprisingly, the trendline for U.S. capex budgets overall has been in retreat even as the Lower 48 unconventionals upended the world’s energy mix.

The United States overall has lost about 800 bp of global capex share since 2019, Evercore’s analysis noted.

“Spending cuts by the majors are driving our lower U.S. capex outlook, as well as tapering international growth, with the majors and Russia the only two parties to cut international spending for a second consecutive year,” West said.

The North American independents rank at No. 2 with 23% growth, but the group overall is failing to drive overall global capex growth “as they make up a modest 1% of international spending.”

Meanwhile, a 13.5% increase in spending is forecast for the region making up Asia, Australia and India.

That’s notable because “the largest global operating region is 1.6 times the size of second place U.S. For reference, the Middle East, Latin America, and Africa combined are 5% smaller than the India, Asia and Australia market, which is also 5% larger than it was in 2019.”

Evercore’s data indicates international spending may have bottomed. Analysts expect Africa to grow from a “very low base by 12% and Latin America by 10%, while Middle East growth is constrained to 5% in 2021.”

Spending by some of the European E&Ps also is set to rebound this year, up 30% after falling by 23% in 2020. The national oil companies “continue to dominate,” with Norway’s Equinor SA and Italy’s Eni SpA “making up more than half of all regional spending.”