Heather White Called Out a Real Estate Developer for Its All White Fitness Lineup. They Listened

Samuels & Associates acknowledged its own failures, and is now working with the boutique fitness studio to improve its practices.

Read all about the latest gym openings, healthy events, and fitness trends in our twice weekly Wellness newsletter. 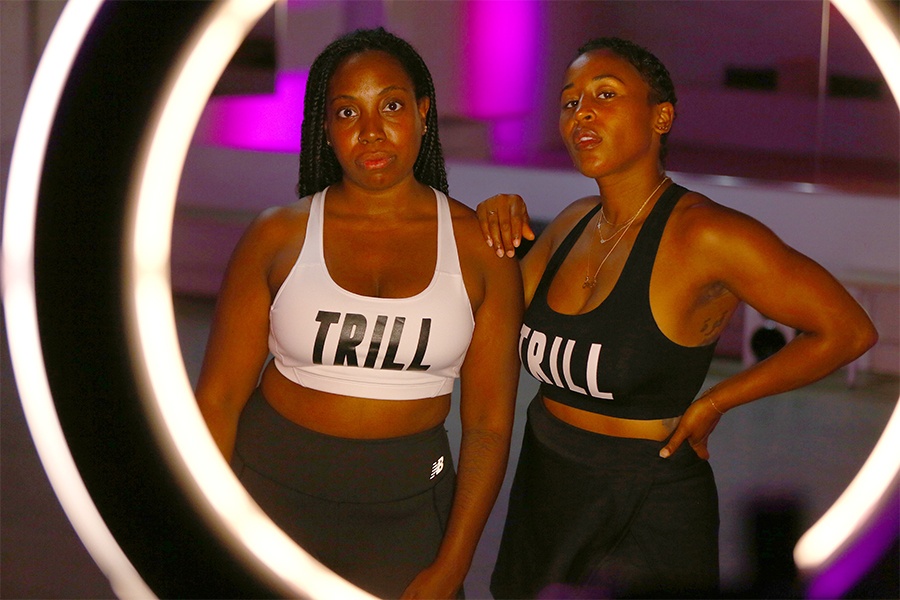 Heather White is temporarily running her boutique fitness studio, TrillFit, from Belize entirely on her phone. She’s there visiting family and, in the sweltering heat, her laptop died. Then during our call, her phone overheats, shuts down, and we can only pick up our conversation after she stashes it in the freezer for a few minutes. Which is to say she’s persistent, as if you needed proof beyond the smash success of her inclusive and hip-hop fueled brand, which she built from popups in 2015, to her first brick-and-mortar studio in Mission Hill which opened in 2018, to an expansion to New York City with the opening of a Brooklyn studio by year’s end.

But with her success comes a sense of responsibility to improve the wellness industry that she loves so much, and to use her platform and voice to clear a path for more people like her to succeed. Before a recent move to New York, she was one of Boston’s only Black gym owners, and she’s repeatedly spoken up about just how overwhelmingly white boutique fitness is, both in Boston, and across the wellness industry more generally. And she wasn’t shy about raising the issue recently when a prominent Boston power player premiered a wellness lineup that looked awfully familiar, and not in a good way.

What caught her eye was a recent promotional email from powerhouse real estate developer Samuels & Associates. The company has developed a slew of commercial and residential buildings in Fenway, including the Fenway Triangle and Van Ness, but its work goes beyond building development—it also activates spaces in the neighborhood, with programming including art walks and fitness classes, which it publicizes through TheFenway.com and related social media channels. And in mid-July when Samuels & Associates released the schedule for its Fit in the Fenway summer fitness series at the Green on 401 Park, right by Time Out Market Boston, White noticed that not a single Black-owned wellness brand or wellness practitioner was on the schedule.

Fit in the Fenway’s exclusion of Black fitness professionals was especially galling given Samuel & Associates’ promise last year: “We pledge to you that our team is engaged in active conversations on how we can advance issues of societal justice on our platforms.”

White wasn’t about to let the email, and the schedule, go unremarked upon. On her own platforms—including the nearly 11 thousand followers on TrillFit’s Instagram as well as over seven thousand on her personal profile—she says her followers expect a certain level of discourse from her.

“I had this question as a community leader and as an organizer and someone who is fighting for justice and equality,” she says. “Here is the tangible proof of an organization with considerable resources. These are developers. These are rich people who have said, we promise you, the Black community, we promise to support you because we feel bad about this issue that has now been raised to us. We didn’t realize that the world is so unfair for you and we commit to you and we support you. To see a brand say that and then later completely ignore that promise and not hire one Black person for their event I found to be super reprehensible.”

She went on Instagram, and called out Samuels & Associates via their @TheFenway Instagram page. “If you post a black square on Instagram, you should hire Black people,” she said in one Instagram story, referencing the “blackout Tuesday” Instagram activism of June 2020, where brands and individuals posted black squares on their feeds in solidarity with Black Lives Matter. “@thefenway: Do better. Period,” she continued.

The response from her followers was immediate, and very positive. White says she received hundreds of direct messages in response. Drag them, people said, seemingly thrilled to see one of the city’s most prominent developers criticized for not fulfilling their pledge to diversity. They also thanked her for calling out yet another example of performative allyship in an era when they’re all too common. And Samuels & Associates itself responded quickly, reposting her criticism on their own page, and then reaching out to her directly to talk.

“We listened to what she was saying, and acknowledged it, and wanted to hear from her, and wanted to do better,” says Leslie Cohen, chief operating officer at Samuels & Associates, where she also oversees the firm’s diversity, equity, and inclusion initiatives. “We are focused on diversity, equity, and inclusion. And it’s all about being intentional, and about expanding the lens in which each individual views things. And so Heather was raising the bar for us and setting a reminder to us to be intentional.”

Or as White herself puts it, “They were like, ‘You know what, we know we fucked up. We did make this promise and yes, you are, in fact, right. We didn’t hire one Black-owned brand or one Black wellness practitioner even though there are many in Boston for this series. What can we do to make things, right?’”

This type of criticism isn’t new, as any person of color who’s rolled their eyes at yet another lily-white lineup in Boston could tell you. But companies are less and less likely to be able to sweep these choices under the rug with vague promises of improvement. As White explains it, “We live in a time where influencer culture is at an all-time high. So, with big platforms and big voices, folks don’t want negative press coming from those people as well.”

In recent days, other prominent orgs have come under fire for exclusionary practices. After calls to diversify its leadership following its tone-deaf statement regarding Black Lives Matter in 2020, Boston Pride decided to disband instead in July of this year. And a recent article in the Boston Globe chronicled the story of Black entrepreneur Courtney Blagrove, who co-founded Whipped Urban Dessert Lab in Boston, but established her first storefront in New York City after disagreements with WS Development over a Seaport space. (A negative interaction with WS Development also led White to open her first studio in Mission Hill and not try to find a spot in Seaport. WS told the Globe it had no record of working with TrillFit, and that the studio had been hired for an outdoor fitness event through a third-party.)

Case in point: the just-announced TrillFest 2021, TrillFit’s annual wellness bash, which will feature fitness classes, live music by R&B singer-songwriter Lisa Bello and hip-hop artist Dutch ReBelle, and more, all taking place at the Samuels & Associates property 401 Park in Fenway on August 28. “We have worked with the TrillFit team in the past and saw a great opportunity to host Trillfest as a visible reinforcement of our commitment in this area,” Cohen explains. The event takes on an even more activist message this year, following last year’s scaled-back event due to COVID. Proceeds from ticket sales to a dinner at Mida Newton on the 27th, along with additional funds raised at the event, will go towards TrillFit’s scholarship fund to help instructors of color break into the wellness industry—one where only 6.4% of practitioners are Black. And proceeds from TrillFest’s ticket sales and donations accepted on the day of the event will go towards the Black AIDS Institute. Plus, a free COVID vaccine clinic will be onsite, in partnership with Boston Medical Center.

And recent consulting work with Samuels & Associates is only the beginning. WS Development and Graffito SP followed suit and have tapped TrillFit to help them work towards their equitable aims, which White welcomes. (“Our efforts to build a diverse and inclusive Seaport span so many facets of the neighborhood—from programming, partnerships, operations, art, and tenancy. We are continuously looking to broaden our existing base of collaborators towards this end and are excited about our discussions with Heather,” WS Development said in an emailed statement.)

“What folks don’t realize is developers have so much power,” White says. “Developers control who you see in your neighborhood, who gets to live in your building, who your neighbors will be. Whether downstairs you have a Wingstop, or a Chipotle, or you get to have Mida, right? So when developers work with leaders in the community to actually understand what citizens in the community need and want, the results are already going to be super, super radical.”

Sure, some might have a more cynical take on corporations supporting social justice causes, perhaps as a way to court an increasingly activist-minded consumer base. And then there’s the fear of financial consequences to corporate actions. White points to New Balance facing a public backlash after it was uncovered that the Boston-based athletics company’s chairman donated nearly $400,000 to the Trump Victory fundraising group in September 2017. So is corporate activism sincere? And should it even matter?

“For me, however someone comes to the table, I don’t really care if they’re just doing it ‘cause they want to get richer and ‘cause they know it makes more sense, or if they truly believe it,” White says. Then, after a pause, she continues, “I hope people believe it. I hope people believe it ‘cause it will mean that we live in a better world. But if we can at least remake policies, and remake procedures using people’s fear of culpability, or fear of being canceled, or fear of white guilt—a hundred percent I’ll do it, because those laws and policies and procedures can save Black and brown lives. And that’s what I care about.”