Data from CoreLogic, to be released later this morning, is expected to show another leap in national house prices.

That will please millions of Australians who own their own home or investment property, but it also puts housing further out of reach for first-time buyers.

Bill Shorten, who made housing affordability a centrepiece of Labor’s 2019 federal election strategy, noted: “This nation can’t keep giving away money to property investors to make losses on property.”

The former Labor leader had wanted to change the rules surrounding the popular negative gearing tax break, which allows more than a million Australians to claim net rental property “losses” against their non-real estate income.

Under Mr Shorten’s plan, negative gearing would have been restricted to new homes, and the capital gains tax discount — which allows investors to flip properties at a profit without hefty tax bills and costs the federal budget just shy of $10 billion annually — would have been reduced from 50 per cent to 25 per cent.

But last week, as Labor leader Anthony Albanese reportedly sold his Marrickville investment home for $2.35 million, he announced the party would dump both policies ahead of the next federal election, at the same time as abandoning Labor’s opposition to the federal government’s stage 3 tax cuts.

“We took those policies to the last two elections. They didn’t find favour with the electorate,” Labor’s financial services spokesman Stephen Jones said.

“We need to ensure that the policies we take to the next election are going to be able to assist first home buyers to get into the market.”

Low interest rates and generous tax breaks for housing have seen more investors like Darryn Stone make their way back into the property market.

In the early 2000s, the self-employed builder purchased an investment property close to his home in Karrinyup, north of Perth’s city’s centre.

Now he is looking to buy another.

“It’s certainly a competitive market out there at the moment,” Mr Stone said.

“Anything you look at, there’s definitely overpaying going on in certain sites.”

Mr Stone is currently positively geared thanks to low interest rates, but it will not stay that way forever.

He hopes tax breaks are here to stay to ensure the investment delivers the financial return investors like him need.

“The tax benefit is an advantage, and if that advantage is taken away you’d really have to look closely in terms of the metrics of the income you’re going to produce,” he said.

But economist Saul Eslake has long argued against Australia’s existing housing tax breaks, saying they cause people to speculate and push house prices to unstainable levels.

“It does now seem that investors, combined with second-time buyers who are seeking to upgrade their homes, are once again squeezing would-be first home buyers out of the market,” he said.

Data from the banking regulator, the Australian Prudential Regulation Authority (APRA), shows the portion of new housing loans going to investors is once again rising.

The portion of new mortgages lent on interest-only terms has also gone up from pre-pandemic levels to 19.3 per cent in the March quarter.

The portion of new home loans made with lower deposits is likewise on the rise.

Those with a loan-to-value ratio of 80 per cent or more has increased to almost 42 per cent across all borrowers, making it the highest on record.

Mr Eslake said some of that could be explained by an increase in the proportion of loans being made over the past 12 months to first home buyers, who typically had lower deposits than investors.

“On top of that, in the most recent budget, we’ve had the government announcing new or expanded schemes encouraging people with deposits of as little as 2 per cent to take out housing loans, which I think carries some very significant risks for those people, as well as adding at the margin to the risks to the financial system as a whole.”

Mr Eslake said the policies locked many young Australians out of home ownership.

“The most recent census in Australia in 2016 showed that the overall home ownership rate among Australians was the lowest it had been since the census of 1954.

“And I suspect that when the 2021 census numbers come out, which they should do about this time next year, they’ll show that the home ownership rate has declined even further since 2016, and especially among people under the age of 40.”

Senior economist at the Australia Institute, Matt Grudnoff, backed that up.

He has done analysis that shows the financial benefits of negative gearing mainly go to high-income, middle-aged men.

“More than half of the benefit of negative gearing goes to the top 20 per cent of households by income, while the bottom half get less than 20 per cent,” Mr Grudnoff said.

“More than 60 per cent of the benefit goes to those between 40 and 60, and men get more than twice as much benefit as women.”

While there are a significant number of people on middle incomes who negatively gear, the way the tax break is structured means the actual benefit is skewed to those on high incomes. 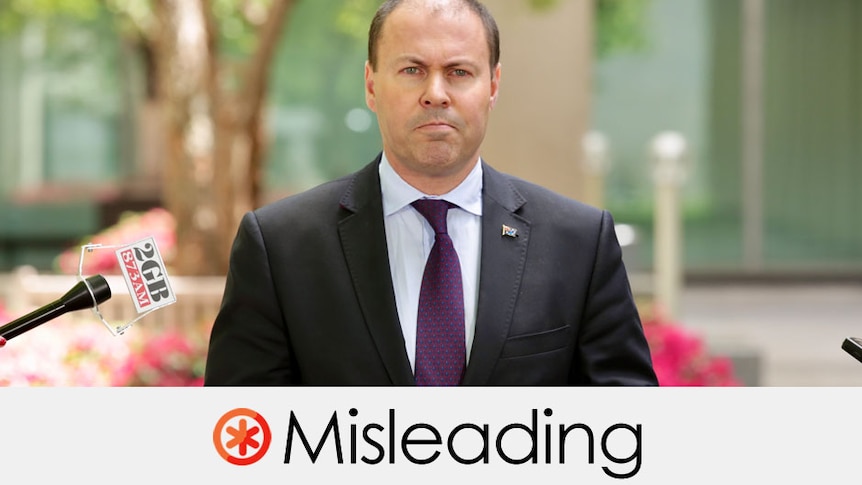 Treasurer Josh Frydenberg says that two-thirds of people who use negative gearing have a taxable income of under $80,000 a year.

This is because the benefit from each dollar of negative gearing is based on an individual’s marginal rate of tax.

“A high-income earner on $200,000 per year faces a marginal tax rate of 47 per cent, which means they get back 47 per cent of their rental loss,” Mr Grudnoff said.

He added that high-income earners also had the extra income to sustain rental losses.

“This allows them to make larger losses on more expensive houses or a larger number of houses,” he said.

The latest available data from the Australian Taxation Office (ATO) for 2018-19 showed that of the 2.2 million taxpayers owning at least one rental property, 1.3 million declared a net rental loss that financial year.

There are still many landlords owning multiple properties and getting deductions on them.

The ATO data shows the bulk — almost 1 million people — had only one property negatively geared.

But there were 11,226 individuals who had negatively geared at least six properties in 2018-19.

And age and gender also matter in terms of who benefits.

“Almost 80 per cent of the benefit goes to those aged 50 and older,” he said.

“Only 12 per cent goes to those under 40 and just 1 per cent for those under 30. It also mainly goes to men, with women getting less than 40 per cent of the benefit.”

He said the CGT discount had made the payoff for negatively gearing a house much more profitable, and also encouraged people to focus their investments on assets they thought would go up in value.

“This is speculation,” he said.

“It is an important part of the story of why property prices have increased so dramatically over the last 20 years.”

Australia is not the only country with unaffordable housing.

In New Zealand, house prices have leapt almost 30 per cent over the past year.

But its government, led by Prime Minister Jacinda Ardern, has axed its version of negative gearing in a bid to cool investor demand and make it easier for first home buyers to enter the market.

Chief economist at ANZ New Zealand, Sharon Zollner, said even though the policy’s impact on house prices had been “muted” thus far, “it would be a mistake to assume that the policy is toothless”.

“When interest rates go up, that now has a tax increase attached to it,” Ms Zollner said.

“It makes interest rate increases more powerful, in terms of slowing things down, and increases the risk that more people decide to sell.”

New Zealand is in an even bigger housing boom than Australia right now, but authorities have moved to stop it. Will Australia follow the Kiwis’ lead?

She said that would mean the Reserve Bank of New Zealand would need to tread fairly carefully when it raised interest rates “to make sure they don’t cause an accident”.

In 2019, the Property Council of Australia commissioned modelling that showed the economic consequence of pulling back housing tax breaks.

Its chief executive, Ken Morrison, said modelling undertaken for the council by Deloitte Access Economics found that Labor’s previous policy would have reduced gross domestic product by $1.5 billion, shrunk the construction sector by $766 million, and failed to meet its stated objectives of improving housing affordability and increasing housing supply.

He said most Australians who used negative gearing were “not rich property barons with dozens of properties”.

“These are everyday ordinary Australians who have saved to get ahead and [are] using property investment as a vehicle to do that,” Mr Morrison said.

The Grattan Institute’s chief executive, Danielle Wood, said scrapping housing tax breaks alone would not stop the market from overheating or be the “silver bullet for affordability”.

“You might only wipe a couple of percentage points off the overall price [of housing],” Ms Wood said.

“But what it does is mean that you’re going to have more homeowners in the mix and fewer investors.

“It’s about shifting the kind of balance of who’s buying houses.

“At the moment, you’ve got a sort of a subsidy towards those at the top end of the market, and it’s skewing the market away from homeowners and towards investors.

“And if you believe that home ownership is important … particularly for young people, then this is a way that we can even the playing field.”