Is MercadoLibre Stock a Buy Now?

MercadoLibre‘s (NASDAQ: MELI) stock price surged 16% on Aug. 4 after the Latin American e-commerce and digital payments giant posted its second-quarter earnings report. Its revenue rose 52% year over year (56.5% on a constant currency basis) to $2.6 billion, which beat analysts’ expectations by $80 million. Its net income surged 81% to $123 million, or $2.43 per share, which also topped the consensus forecast by $0.79.

MercadoLibre’s headline numbers were impressive, but is its stock finally primed to rebound after losing about a third of its value over the past 12 months? Let’s dig deeper to find out. 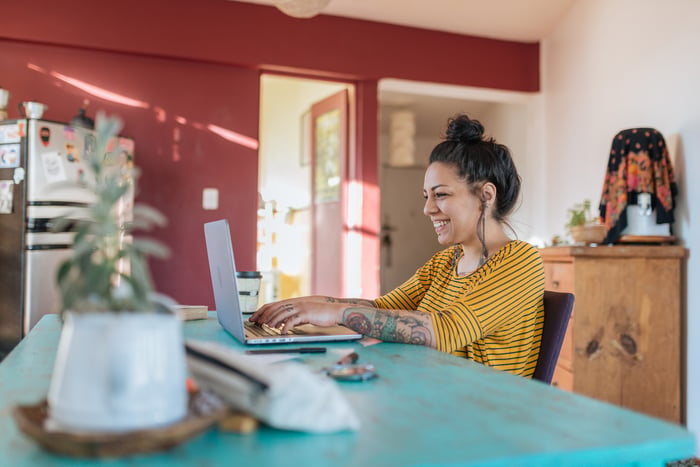 It’s firing on all cylinders

MercadoLibre’s gross merchandise volume (GMV) rose 26% year over year to $8.6 billion (in constant currency terms) in the second quarter. Its total payment volume (TPV), which includes both on-site and off-site payments processed by its Mercado Pago platform, grew 84% to $30.2 billion. Its total number of unique active users increased 11% to 84 million.

MercadoLibre’s GMV growth decelerated as it faced challenging comparisons to the pandemic-induced surge in online shopping, but it’s still locking more active users into its expanding fintech ecosystem (which includes payment, credit, and digital wallet services) and its online marketplace.

As a result, MercadoLibre continues to generate stronger revenue growth than many of its e-commerce peers. By comparison, Amazon‘s (NASDAQ: AMZN) revenue rose just 7% year over year in its latest quarter. Etsy (NASDAQ: ETSY), which bought MercadoLibre’s smaller rival Elo7 last year, reported an 11% year-over-year increase in revenue in its most recent quarter.

In its shareholder letter, MercadoLibre said its “ecosystem is powerful, even during challenging times, (and) delivering improvements across our different geographies and business units.” The company’s growth across its three largest markets — Brazil, Argentina, and Mexico — also remained robust.

Its margins are healthy

In the second half of 2021, many investors started to fret over MercadoLibre’s declining margins. But over the past two quarters, its gross margins expanded significantly as its operating margins recovered.

MercadoLibre said its gross margins expanded as economies of scale kicked in and reduced its costs for logistics, payment processing services, first-party products, customer service operations, and fraud prevention measures. It also said a careful balance between its investments in new products and tighter sales and marketing expenses strengthened its operating margins.

MercadoLibre’s margins might fluctuate over the next few quarters, but analysts still expect its earnings per share (EPS) to nearly quadruple this year and increase another 85% in 2023. We should take those estimates with a grain of salt, but they suggest that MercadoLibre’s profits will continue to rise as it scales up its e-commerce and fintech businesses.

Its stock is still reasonably valued

MercadoLibre’s stock trades at five times this year’s sales, which isn’t a high price-to-sales ratio for a company that generates high double-digit revenue growth. But it also trades at more than 100 times forward earnings — which looks a bit pricey compared to other e-commerce companies. Amazon and Etsy trade at 84 and 41 times forward earnings, respectively.

However, MercadoLibre still has plenty of room to expand as Latin America’s income levels and e-commerce penetration rates rise. Its profits could also increase significantly over the next few years and reduce its forward price-to-earnings ratio. MercadoLibre’s stock might remain volatile as inflation, rising interest rates, and other macro headwinds rattle the markets. Nevertheless, I still believe it’s one of the best international growth stocks to buy and hold for the next few decades.

10 stocks we like better than MercadoLibre
When our award-winning analyst team has a stock tip, it can pay to listen. After all, the newsletter they have run for over a decade, Motley Fool Stock Advisor, has tripled the market.*

They just revealed what they believe are the ten best stocks for investors to buy right now… and MercadoLibre wasn’t one of them! That’s right — they think these 10 stocks are even better buys.