JAKARTA — Investors in the booming global market for Islamic bonds, or sukuk, have little clarity on how defaults in the sector will be resolved, even as issuance tears toward an annual record.

The uncertainty has been brought to the fore in recent weeks after the airline Garuda Indonesia defaulted on a payment, while attempts to standardize the industry remain in their infancy.

With sukuk only starting to take off in recent years, there have been very few defaults to date and most, if not all, were resolved out of court, according to a warning from Bashar Al Natoor, global head of Islamic finance at credit rating agency Fitch Ratings.

And with the coronavirus pandemic potentially driving more defaults and requests for extensions and restructuring, questions are increasing as to whether sukuk holders will be able to enforce their contractual rights and redeem the debt if a nonpayment occurs.

“From what we saw so far, even in the cases before [Garuda], you cannot see a court resolution. This is why we’re looking at Garuda … how is this [going to be] resolved, how is the recovery, how is this going to be treated — at court or outside?” Al Natoor told Nikkei Asia in a recent interview.

“This is not an issue only for Islamic finance … but sukuk has an additional complexity because of Shariah requirements,” he said, referring to Islamic law. “And complexity is definitely not something … welcomed in distressed scenarios.” 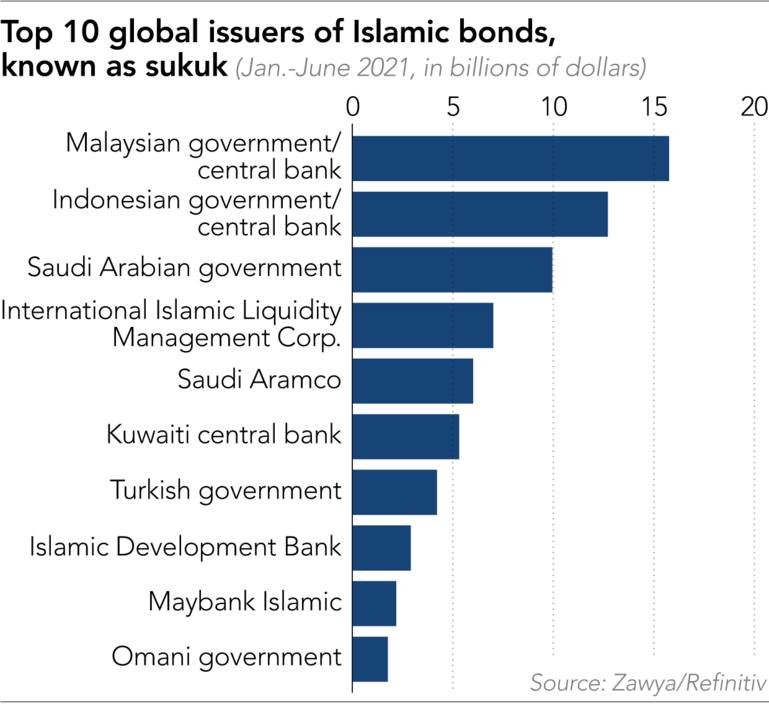 Unlike conventional bonds, sukuk are structured to be compliant with Shariah law’s ban on charging interest on loans. A sukuk purchase is structured as ownership of a tangible asset, whose profits cover coupon payments.

Hard-hit by the pandemic and mobility restrictions, Garuda narrowly avoided defaulting on its $500 million sukuk last year after winning creditors’ approval for a three-year maturity extension. But the airline, which is majority-owned by the Indonesian government, missed its coupon payment deadline in June and said it had no choice but to continue to defer remittances.

Al Natoor pointed out that different jurisdictions have different court mechanisms for sukuk defaults. Malaysia’s advanced sukuk ecosystem includes a centralized body for Shariah law and high industry standardization, allowing it to deal with sukuk defaults “in a comparable way” to bonds.

Indonesia’s system is less developed, with the law authorizing Islamic financial dispute resolutions to be handled by domestic religious courts that deal mostly with divorce cases and lack competence in commercial ones. In practice, sukuk disputes in Indonesia can be settled in commercial courts — as was the case with the 2012 default of shipping company Berlian Laju Tanker, which resulted in a restructuring plan — but only if the parties agree.

Even for international sukuk, which are governed by English law, there remains uncertainty. Al Natoor cited the case of UAE energy company Dana Gas’ $700 million sukuk default in 2017, which also caused worries about enforceability among global sukuk investors.

An English court ruled that obligations under the sukuk were binding and Dana Gas had to pay its holders, but then the company went to a UAE court and said the sukuk was no longer Shariah compliant due to changes in local Islamic finance interpretation, and therefore it was under no obligation to pay. The case was eventually resolved out of court, with a restructuring deal between Dana Gas and its bondholders, including U.S. fund manager BlackRock and investment bank Goldman Sachs.

In addition to the lack of court resolutions, the sukuk industry also lacks standardization internationally, and sometimes locally in various respects, such as accounting, legal documentation and even Shariah interpretation: one bank, for example, could say some transactions are Shariah compliant while another in the same country says they are not. 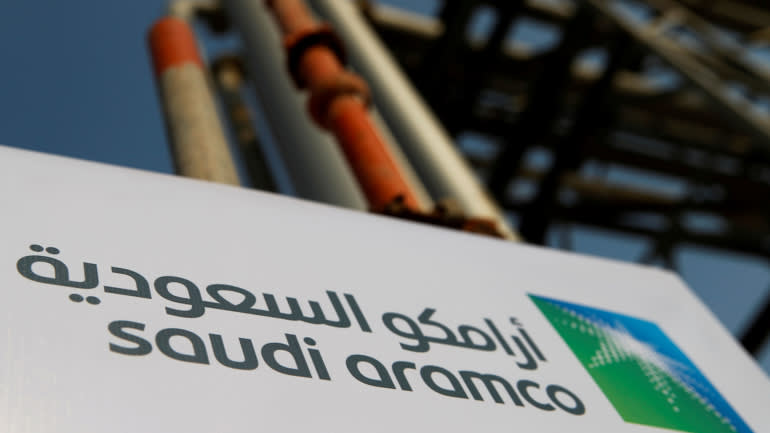 Attempts to improve standardization have not always been welcomed by investors and issuers, as they often add to layers of sukuk procedural complexity. This has been the case with the UAE’s adoption earlier this year of new standards issued by the Accounting and Auditing Organization for Islamic Financial Institutions, a body consisting of 20 Shariah scholars from 15 countries.

S&P Global Ratings, in a July note, said the adoption of the so-called AAOIFI Sharia Standard 59 has depressed sukuk issuance in the UAE, as some technical aspects of the new rules mean compliance could create “new potential scenarios for early sukuk dissolution.”

“Overall, this could mean more difficulty in accessing the sukuk market and lower investor appetite for the instrument,” S&P said. The rating agency is more upbeat, however, about the longer-term benefit of the new agreement, adding that it “would ultimately lead to the standardization of the full spectrum of sukuk.”

S&P said: “Over the next 12 months, we expect some progress on the unified global, legal, and regulatory framework for Islamic finance that Dubai and its partners are developing.”

Despite the uncertainties the sukuk industry has continued to expand, with quarterly issuance exceeding $50 billion for the first time between April and June, bringing the total to $100 billion in the first half of this year, up from $88.7 billion in the same period last year, according to Middle East business intelligence service Zawya, citing data from its parent company global data provider Refinitiv. Refinitiv said total global sukuk issuance for 2021 is expected to hit a record of around $180 billion.

Governments are leading the charge, seeking to finance stimulus packages to cushion impacts from the pandemic, but companies are also coming to the market after delaying plans last year. A $6 billion issue by the Saudi Arabian oil giant Aramco in June was the biggest ever corporate sukuk.

Malaysian sovereigns issued $15.77 billion in total value in the first half, followed by Indonesian sovereigns at $12.72 billion and the Saudi government’s $9.95 billion. Among companies, after Saudi Aramco, Malaysia’s Maybank Islamic issued $2.17 billion. 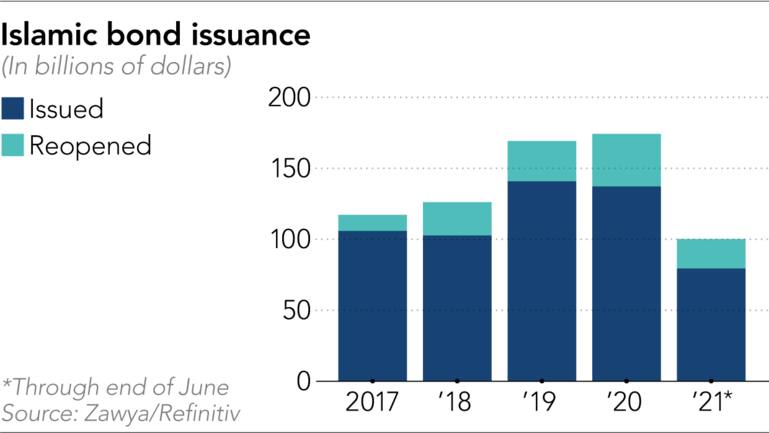 Indonesian Finance Minister Sri Mulyani Indrawati said sukuk have continued to play an increasing role in financing her country’s state budget, from just 4.7 trillion rupiah ($328.4 million at the current exchange rate) when the government issued its first sukuk in 2008 to cumulative issuance of 1,810 trillion rupiah as of June. The government’s outstanding sukuk as of July 1 reached 1,075.8 trillion rupiah, or 19% of its total outstanding bonds.

Despite being home to the world’s largest Muslim population, Indonesia’s Islamic finance market lags behind Malaysia and some Gulf nations, but the government is eager to play catch-up. It issued the world’s first sovereign green sukuk in U.S. dollars in 2018, and has since become a regular issuer of the instrument.

“The government’s commitment to developing the Shariah capital market is very strong, including through government sukuk issuances,” Indrawati told a webinar on July 15. “[This] is in line with the increasing aspiration among the public for Shariah-based financial instruments.”

Analysts said the sukuk industry has continued to attract new players inside and outside the Islamic world since the world’s first such certificate was issued in Malaysia in 1990. The increasing appetite of Shariah-conscious Muslim investors, growing support from the governments of Islamic nations and global investors looking for opportunities in emerging markets, which include most sukuk-issuing jurisdictions, are expected to continue driving long-term demand.

S&P said that despite concern over the legal niceties and the risks from the evolving pandemic, stronger sukuk performance is expected for the remainder of this year. Issuers are seeking to diversify their funding and taking advantage of a low-interest rate environment, it said, while global investors are hunting for yield.

“Despite higher oil prices and lower fiscal deficits, we expect that some sovereigns in the Gulf Cooperation Council will continue to tap the market to fund their economic diversification programs,” the credit ratings agency said.

“Companies held on to cash during the heights of the pandemic and deferred capital expenditure. A portion of these investments are expected to be executed in 2021 and will necessitate access to capital markets,” it added.