Lebanon’s national currency plunged to a new record low on the black market against the dollar on Saturday, as an ongoing economic crisis continues to wipe out savings and raise living costs, unleashing widespread protest.

The Lebanese pound has been pegged to the dollar at 1,507 since 1997, but the country’s worst economic crisis in decades has seen its unofficial value plummet on the black market.

On Saturday, money changers told  AFP news agency that the pound was trading at 17,100 to 17,500 to the dollar on the black market, while some social media users said it had fallen as low as 18,000.

In the coastal city of Tripoli, dozens of people took to the streets to condemn the currency’s depreciation and “difficult living conditions,” Lebanon’s National News Agency (NNA) reported.

Some protesters managed to break through the gates of a branch of the central bank and enter the courtyard, the NNA said, but the army prevented them from reaching the building.

Demonstrators also set fire to the entrance of a government office, an AFP correspondent said. 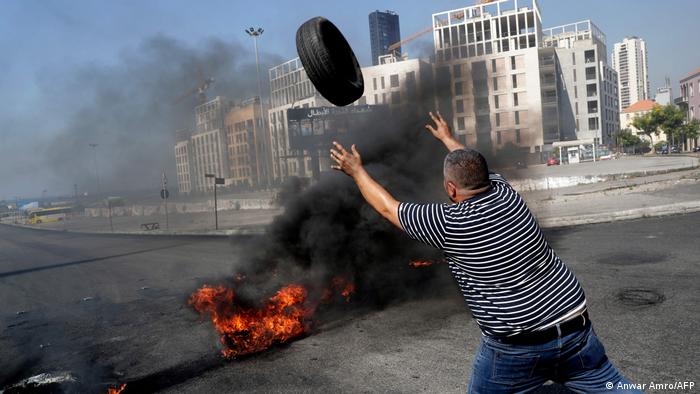 Others were seen trying to force their way into the homes of two lawmakers but were stopped by security forces.

In the southern city of Sidon, protesters tried to storm another branch of the central bank. They were also pushed back by security forces, the NNA reported.

Scattered protests also took place in the capital Beirut, where a small number of protesters took to the streets and burned tires, an AFP correspondent said.

Lebanese were struggling to fill up their cars with gas on Saturday, a day after the country’s caretaker government reduced subsidies.

Long lines of cars stretched outside gas stations in Beirut where motorists reportedly waited for more than two hours to get half a liter of gasoline.

The caretaker government’s lack of foreign currency reserves, which are necessary to import fuel, has been blamed for the shortages.

What is behind Lebanon’s financial meltdown?

Lebanon’s financial collapse began in 2019, but the build-up began much earlier.

Following the 1975-1990 civil war, successive governments piled up debt, the equivalent of 150% of national output.

Political instability, corruption and mismanagement saw little return on the borrowed cash, except for a large number of skyscrapers built in downtown Beirut.

Rather than rein in spending, politicians continued to splurge and corruption was rife. The government also failed to deliver reforms causing foreign donors to hold back billions of dollars in aid they had pledged.

Then in 2019, youth-driven mass protests erupted against Lebanon’s political elite. They demanded wholesale change in government.

Following this, foreign exchange inflows dried up and dollars exited Lebanon. Banks no longer had enough dollars to pay depositors queuing outside, so they shut their doors.

Compounding problems, an explosion in August 2020 at Beirut port killed around 200 people and caused billions of dollars of damage.