The liquefied natural gas (LNG) shipping market remains tight as demand from South America to Asia is strong, but analysts said freight rates could diverge from LNG prices in the coming weeks on a variety of factors. 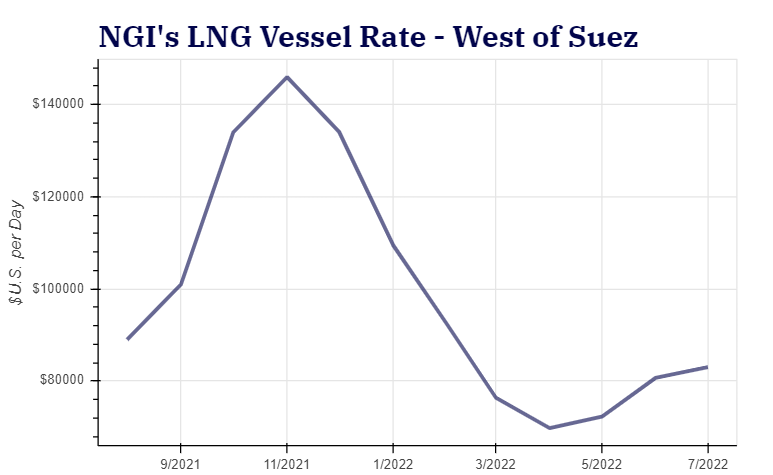 For now, vessel rates are up. While the spot market in the Pacific Basin is “fairly quiet,” demand for shipping remains high in the Atlantic Basin, shipbroker Fearnleys AS said this week.  Daily vessel rates in the Atlantic for a standard 174,000 cubic meter vessel were at $89,000 on Friday, up from $75,000 a week earlier, according to Fearnleys. In the Pacific, they stood at $73,000, up from $65,000 the prior week.

Strength in the Atlantic market is being driven by booming U.S. exports. While American exports slowed this month on maintenance outages, Vortexa analysts said LNG carrier utilization from the United States has surged this quarter. The firm said 85 LNG carriers were in transit from the country on May 16, a record annual high.

European storage inventories stood at just 43% of capacity on Friday, while surging demand in Asia continues to attract LNG cargoes.

“Storage in Europe remains low and more cargoes are expected to head there in build-up for winter 2021/22,” said analysts at Braemar ACM, a London-based shipbroker. “Yet strong Asian demand, foremost driven by economic resurgence in China, are contesting spot cargoes, maintaining high hub prices in Europe.”

Vortexa said prices are likely to remain high throughout the summer on hotter forecasts throughout the northern hemisphere and the need to refill storage inventories. Other markets have also increased their call for LNG imports, the firm added. Both South America and the Middle East, which typically account for about 4% of the global gas trade, are currently taking twice as much LNG deliveries. Vortexa said. Hotter weather in the Middle East is driving cooling demand while the southern hemisphere winter is underway.

Benchmark natural gas prices in Europe are currently trading over $9/MMBtu, settling at their highest point in over a decade on Friday. Spot prices in Asia are still well above $11 after dipping slightly on Friday. In Latin America, meanwhile, NGI data shows delivered ex-ship prices are also above $9.00.

Vortexa said freight rates could slide in the coming months as U.S. exports slow down on maintenance. The availability of empty LNG carriers is also on the rise versus historical norms as more ships are being added to the global fleet, according to the firm.

Seasonal demand in the Middle East and South America could also be met by nearby suppliers, taking away tonne-mileage, Vortexa said. If part of the Nord Stream 2 pipeline in Europe comes online by the end of the summer as some expect, it could also prove bearish for LNG imports on the continent.

NGI’s West of Suez Curve, which provides a forward-looking snapshot of demand for vessels in the Atlantic Basin over the coming months, does show vessel rates climbing through the summer and fall months. But prices later in the year are higher, in line with the seasonal peak of the northern hemisphere winter.