Recently one of my U.S. colleagues noted that for the first time in history, new US-Domiciled exchange traded fund (ETF) launches outpaced those of mutual fund launches. To some this may be seen as a turning of tides, as it means that the U.S. fund industry now has the same amount of enthusiasm for the ETF vehicle as it does for the traditional mutual fund model. This is great news for investors, seeing as ETFs offer many of the same benefits as mutual funds, usually at a lower cost for those that can do without financial advice.

In response to the comment, a Canadian advisor asked, what percentage of the new ETF launches is active. 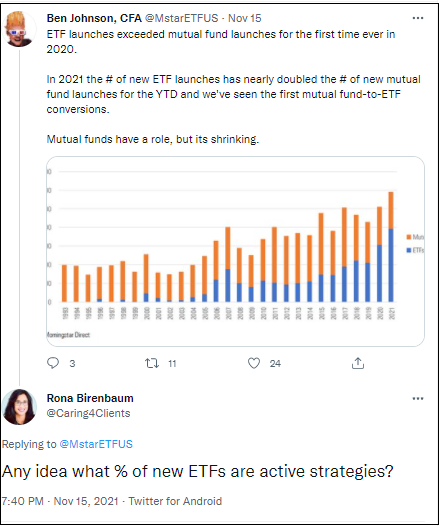 The fact is, actively managed strategies (more expensive than their passive peers) are now becoming more prominent in the ETF space, allowing investors to access professional managers while enjoying the benefit of added liquidity. Does this story hold true for Canada?

Based on Morningstar’s data, it is clear that active management through the mutual fund channel still dominates in terms of not only asset size, but also in Canadian new product launches. 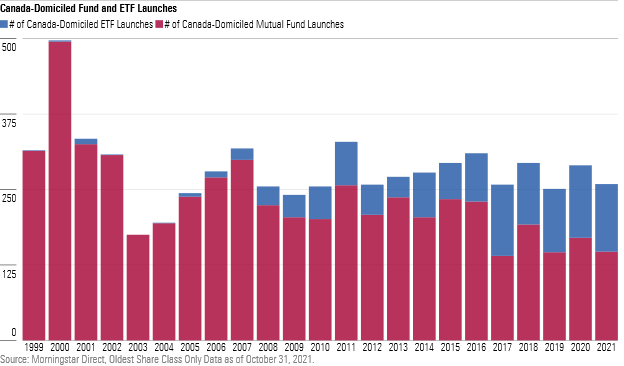 The above chart shows the number of mutual fund and ETF launches and liquidations in Canada over the past two decades (considering just the oldest share class of each unique fund), as well as the number of liquidations. Though the number of ETF launches has risen, asset managers still seem to largely favor mutual funds as the primary vehicle in Canada. In 2020, there were 170 mutual funds launched while only 120 ETFs were launched. Though not quite a turning of tides, the trend toward ETFs evident when you look at the increasing proportion over the last 5 years. 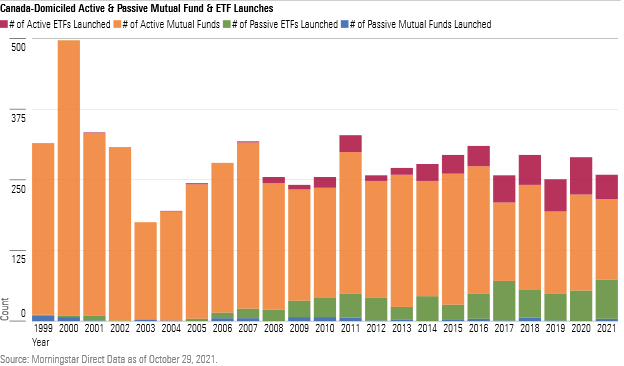 Slicing the data differently, we can also see that Canadian-domiciled asset managers continue to favor the launch of actively managed strategies, though this proportion is shrinking relative to the number of passive strategies. Case in point, in 2020 active launched made up 19% of new launches by count, compared to 15% in 2010. 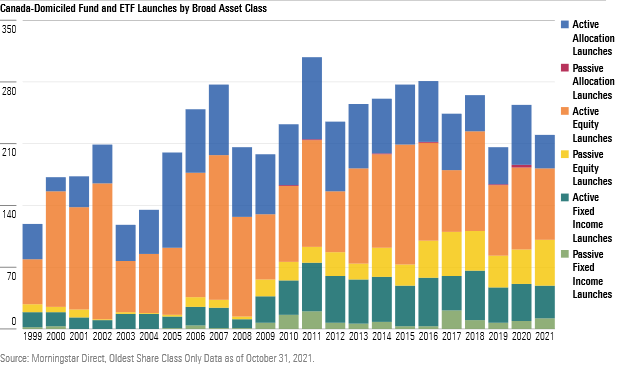 Finally, when we look even further by broad asset class, Canadian fund manufacturers continue to show the most enthusiasm toward passive approaches in the equity space noting an increasing emphasis over the last 9 years.
Given that recent Canadian regulations have put more scrutiny on fees, it would not be a surprise if this trend continues to accelerate in the years ahead to the benefit of investors.

This article does not constitute financial advice. Investors are always recommended to conduct their own research before buying or selling securities.

To view this article, become a Morningstar Basic member.

Inflation could end tech stocks’ winning streak in 2022—and pump up these stocks instead | Fortune You need to...

International stocks, by and large, have been in the limelight, enticing enthusiastic investors with their spectacular returns, especially those...