House prices are rising in many major economies. This FT series explores whether these increases are sustainable.

Dutch call centre worker Joan Kelderman knows from personal experience the downside of Europe’s booming house prices: her landlord is trying to demolish her cheaply-rented home in order to build a new housing and retail complex.

The local authority in Zaandam, a town a few miles north of Amsterdam, said the scheme would create more than 530 new homes, of which 30 per cent would be social housing; about half would be for sale or rent at market prices.

But the 57-year-old former nurse called it “gentrification” after she and other residents were offered a €6,500 moving allowance and told to leave. “They say we have to find somewhere else to live, but nothing is available,” she said. “Even if we do find something, it will be smaller, more expensive and further away.”

The Dutch property market has become a burning political issue. Prices of existing homes in the Netherlands rose 14.6 per cent in the year to June, the highest rate for two decades — and one of the highest in the EU.

Economists at ABN Amro estimate the Netherlands has 330,000 fewer houses than it needs and should build 1m more in the next decade to close the gap. Low-paid people often have to wait more than 15 years for social housing, while homeless numbers have doubled in the past decade.

Kelderman and dozens of her fellow tenants recently marched in protest to the local mayor’s office in a fightback against plans to demolish 122 social houses for people on low incomes or with disabilities. She said they will go to court to challenge the proposals.

They are not alone; social disquiet about housing costs is growing across Europe. Protesters in Spain took to the streets in March to call for fairer housing costs. The Swedish government was toppled last month over its proposal to lift rent caps. And in September, Berlin residents will vote on whether to expropriate 240,000 properties from big commercial landlords.

EU house prices rose 6.1 per cent year on year in the three months to March, the fastest growth in 13 years, leaving them 30 per cent higher since 2010, according to Eurostat. Rental costs were up more than 15 per cent over the same period.

Like the rest of Europe, the Dutch housing market fell sharply after both the 2008 global banking crisis and the 2012 eurozone debt crisis. But residential property prices have been rebounding strongly since the European Central Bank cut interest rates into negative territory seven years ago, pushing down mortgage costs. Further stimulus measures since the start of the coronavirus pandemic have stoked the boom.

House prices are rising in many major economies — but is it sustainable?

Part 1: How the pandemic has triggered the broadest global house price boom for more than two decades.

Part 5: Should house prices count in inflation data, and what can central banks do about the economic effects?

Although housing costs were one of the biggest concerns expressed by the public during the ECB’s recent strategy review, its president Christine Lagarde told the Financial Times last month that she did not think there was a risk of a bubble “on average across the euro area”. The ECB has, however, decided the cost of owner-occupied housing should be included in the main measure of inflation it uses to calibrate interest rates, although it is expected to be years before this takes effect.

The Dutch central bank said high levels of household debt were “one of the main systemic risks for the Netherlands”; it aims to “make sure that the financial sector is sufficiently robust to absorb the consequences of a housing market bust”. It is introducing a rule requiring banks to have €5bn more capital against their mortgage exposures from January.

“The biggest problem is for young people, but young now means 30-year-olds, who still cannot rent or buy something,” said Gert Jan Bakker, a consultant at the WOON tenant support agency in Amsterdam. “Families are leaving the city. People who teach our children, policemen and tram drivers — they simply can’t afford to live here.”

He blames government policy for many of the problems. The Dutch rent protection system had been significantly weakened, Bakker said. It had become easier for landlords not to renew a tenant’s contract, creating “a lot of new urban nomads” who have to move every two years.

Tax changes have also hit social housing associations particularly hard and made them sell many houses to commercial developers.

Bakker said the government should stop allowing homeowners to deduct the cost of mortgage interest payments from their tax liabilities — even though he benefits from this policy himself and he acknowledged it was “difficult politically”. 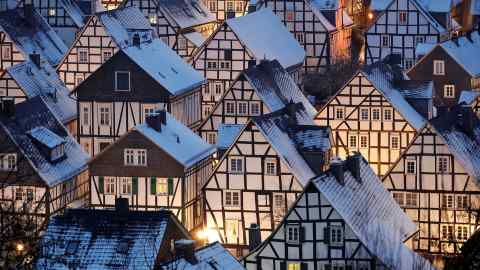 Removing the tax break is one of the conditions Brussels has sought from the Netherlands in return for its share of the €800bn EU recovery fund.

The cost of housing “is a political problem and has been for quite some time”, said Lex Hoogduin, a professor at the University of Groningen and a former board member of the Dutch central bank. “The problem is exacerbated by inelastic supply of housing because of all the permissions needed to build new houses in a highly regulated market.”

Amsterdam has taken some measures to tackle the issue, including rules to stop people buying second homes to rent out on Airbnb and other short-term rental platforms.

But Marjon, a 44-year-old historian, said the high cost of Amsterdam’s housing meant she had to sell her flat and move further north to afford more space after having children five years ago.

Now she catches the ferry to work in the city centre from the former shipyard known as NDSM, which is booming with a scattering of cranes converting industrial warehouses into hipster-friendly apartments, cafés, galleries and offices.

Soaring house prices are “not good for social cohesion”, Marjon said. “Teachers in our kids’ school can’t afford somewhere to live . . . It is not good for the atmosphere of the city. Pretty soon, nobody will be living in the city any more apart from very rich people and foreigners.”