Personal finance is 80% personal and 20% finance

“The investor’s chief problem – and even his worst enemy – is likely to be himself.”

From experience, we know this is true. If you cannot control your emotions and face up to your foibles, the sharemarket can be an expensive place to find out.

How you behave when investing often has a bigger influence than your investing knowledge. This is more relevant than ever given the abundance of information prompting investment action, combined with a dramatic increase in the ease at which investors can trade.

If investors can better understand their investing psychology – particularly the four big cognitive biases below – they will be less likely to make mistakes, such as selling too soon and holding onto losing stocks. They will also be better placed to exploit the mistakes of other investors, including picking up undervalued stocks.

At times, investors lack self-discipline, behave irrationally, and decide what to invest in based more on emotions than facts. The study of these influences on investors and markets is known as behavioural finance.

Traditional theory says markets and investors are rational but behavioural finance believes we act as humans. Or as another giant in the field of finance, Santa Clara University economist, Meir Statman, puts it:

Behavioural finance uses research from psychology that describes how individuals behave and applies those insights to finance. Recognition of the contribution that behavioural finance has on financial economics was reflected in 2002 with the Nobel Prize in Economics being awarded to Professor of Psychology, Daniel Kahneman, now best known for his popular book Thinking, Fast and Slow.

The umbrella of knowledge under behavioural finance continues to grow and evolve. As you can see in the chart below, there are over 180 cognitive biases that have been discovered to date. 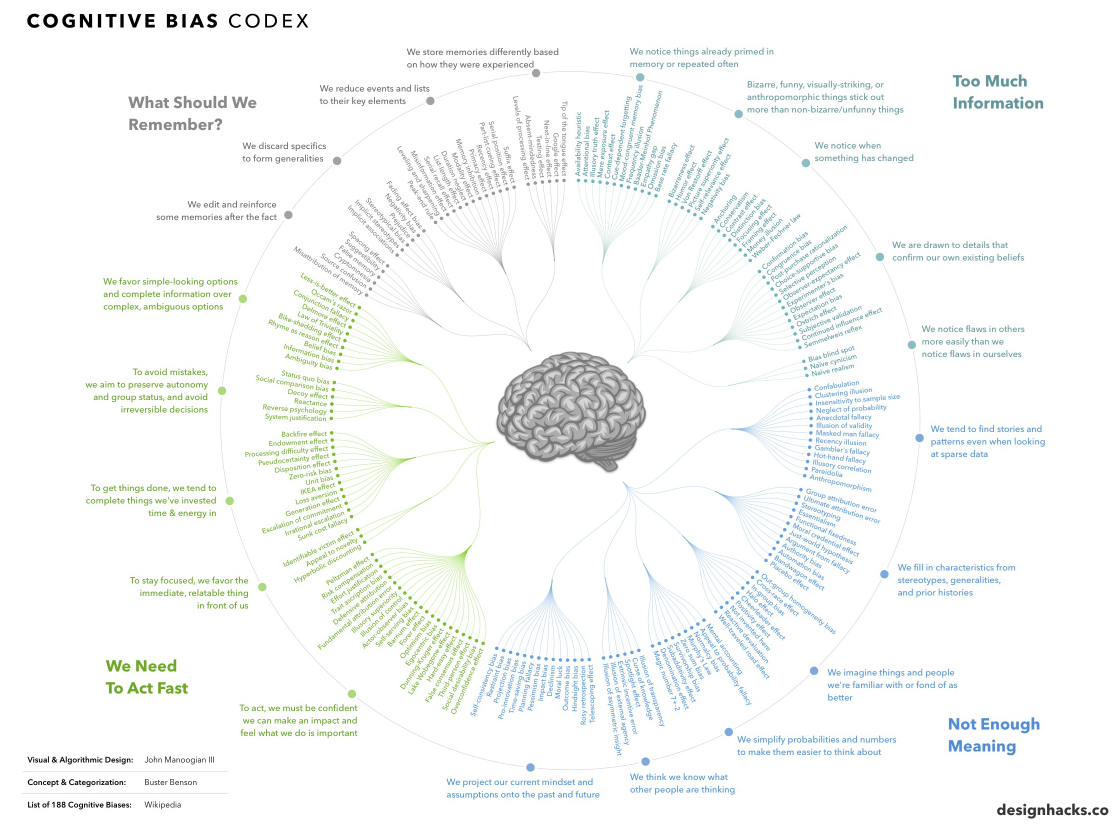 We believe that portfolio managers, and investors in general, need a firm grasp of four key biases to understand how other investors may respond to particular events or market developments.

1. Overconfidence (buying too high and trading too much)

The overconfidence bias is when we delude ourselves that we are better than we really are.

Surveys routinely show that more than 80% of people think they are better than average for a whole list of things, including driving, intelligence … and even looks. Heck, 84% of the French believe they are above average lovers!

In investing, overconfidence can lead you to believe that you know more about a stock or the market than you do. Various studies have tested the effect of overconfidence bias in financial markets. In one study, Bloomsfield (1999) found that overconfident behaviour unconsciously increases investors’ propensity to buy stocks too expensive or sell stocks that are too cheap. Overconfident investors also tend to trade stocks more often than they should and underestimate downside risks. In these instances, when it comes to accumulating wealth overconfidence is detrimental.

Solution: We fight overconfidence by stress testing all our stock ideas in a team environment where everyone else acts as devil’s advocate. We also explicitly consider how the stock would perform in a GFC-style scenario.

Loss aversion is when the pain of losing is felt much more strongly than the pleasure of winning (profits).

Loss aversion proposes that attitudes towards investment gains and losses are not necessarily symmetrical (i.e., they are uneven). When most investors lose 30%, the pain and frustration is felt more acutely than the excitement and pleasure they feel from making a 30% profit.

But each person’s loss aversion can differ. One investor may be willing to suffer a 20% loss for a 30% gain, while another investor may be more sensitive to losses and require the possibility of a 50% gain to compensate for the risk of being hit with a 20% loss.

Loss aversion can mean investors are unwilling to sell unprofitable investments. Even if they do not see any prospect for a turnaround, they wait to ‘get even’ on the position before selling.

Similarly, loss aversion can mean investors take profits too early. They are too quick to cut and run on investments that have made a profit. This limits the upside for investors, and can lead to too much trading, which has been showing to limit returns for everyday investors.

If you’re suffering from loss aversion, look at your portfolio of shares less often. The longer you wait to review your portfolio, the less likely you will be to see a loss and be tempted to sell.

3. Mental accounting (not treating all money as equal)

Mental accounting is when we put our money in different buckets which can distort our behaviour.

This bias is a child of Richard Thaler. Thaler also won the Nobel Prize for Economics in 2017. In the 2015 movie The Big Short, Thaler is the character explaining synthetic CDO’s at the blackjack table alongside international pop star Selena Gomez. He is also the author of the wonderful book, Nudge.

With mental accounting, instead of viewing your assets as a single portfolio, your divide your investments into different ‘mental accounts’.

For example, an investor might have put $20,000 into a fund two years ago that has since generated a $10,000 gain. The theory of mental accounting suggests that many investors may be willing to take greater risk with the $10,000 gain portion than they would with the original $20,000.

Taking greater risk with the portion gained by treating it as ‘house money’ violates the fact that all money is interchangeable.

Outside of investing, but within personal finance, mental accounting can lead to simple errors like having $10,000 cash in a savings account for a holiday, but having $10,000 of credit card debt. It obviously makes sense to use the holiday funds to pay off the credit card and stop paying huge interest, but the person views the two as separate buckets.

Solution: A simple reminder that a dollar equals a dollar no matter which mental account it is sitting in, can be incredibly valuable.

4. Confirmation bias (only seeing what you want to see)

This bias relates to only seeking out or having selective perception for information that confirms our beliefs or values, whilst devaluing those that don’t.

It is easier to digest information that accords with how we already view the world. The cognitive load is much higher when we have to try and integrate new contradictory information into our worldview.

In investing, this often means ignoring any information that goes against a buy or sell decision we have made in the past, rather than objectively analysing it on its merits. At its worst, it means only constructing an ‘echo chamber’ of information sources so that you never run into a view or data that is going to contradict prior beliefs. The internet has made this echo chamber all the more likely over time as algorithms often selectively find and present you similar content over time, reinforcing previous views.

Solution: At Ophir, we actively ask how we could be wrong in our views and seek out people or broker analysts that hold differing views. Another view does not necessarily mean you are wrong but it can help stress test your position for a more balanced view, lest you only see the world from one narrow perspective.

There is much further to go before traditional finance can be integrated with the more dynamic findings from behavioural finance.

As psychologists will tell you, the first step in dealing with an issue, such as these biases, is to recognise there is an issue. There are many great books, such as those listed above, as well as Misbehaving (by Richard Thaler) and Irrational Exuberance (by Robert Shiller) on behavioural finance, and investors should understand more about themselves and the investors they are trading with.

At Ophir, we see these biases as an opportunity which leads to investors overreacting and making mistakes that lead to the mispricing of securities.

Andrew Mitchell is Director and Senior Portfolio Manager at Ophir Asset Management, a sponsor of Firstlinks. This article is general information and does not consider the circumstances of any investor.

Our non-profit organization works with personal finance teachers across the nation, and we are seeing momentum like we’ve never...

Survey Shows These 2 Positive Financial Habits Emerged From the Pandemic

The coronavirus pandemic had a devastating impact on a lot of people's finances. Many lost their jobs in 2020...

Is Now Really the Time to Be Buying Stocks? | Personal Finance

We recognize you are attempting to access this website from a country belonging to the European Economic Area (EEA)...