A Richardson man who goes by the nickname “Doctor Bitcoin” has pleaded guilty to illegally running a business that converted cash to cryptocurrency.

Mark Alexander Hopkins, 42, was indicted in March on one federal count of operation of an unlicensed money transmitting business. He pleaded guilty Tuesday and faces up to five years in prison.

According to court documents, Hopkins admitted that he ran a business where he would take U.S. currency and convert it to cryptocurrency, usually Bitcoin, for a negotiated fee. If the customers were local, he would meet them in person to pick up the cash.

But Hopkins was not licensed to operate such a business in Texas, nor was his business registered with the Treasury Department, authorities said. He also did not take steps to verify his customers’ personal information or the source of their cash, and he failed to report transactions involving large amounts of cash.

In one instance, a customer whose funds were linked to a Nigerian lottery scam asked him to convert his cash to Bitcoin, court documents say. Hopkins knew the customer had a partner in Nigeria but said that he didn’t want to get involved in any business dealings. 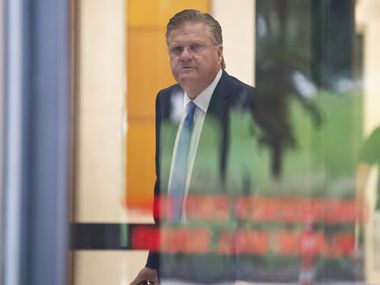 Authorities said Hopkins advised the customer on how to avoid reporting requirements by keeping deposits below $9,500 and to lie to banks about what the business was doing.

“I’m set up as a marketing company, so tell them you’re paying for a marketing campaign,” he said. “If they need more details, say you’re using me to hire bloggers and stuff.”

“This defendant ignored federal law and allowed fraudsters to use Bitcoin to operate under the radar of law enforcement,” acting U.S. Attorney Prerak Shah said in a written statement. “We are determined to rid the Bitcoin marketplace of anyone who knowingly helps criminal actors stash illegal profits inside crypto wallets.”

A judge allowed Hopkins to remain free until his sentencing date, which has not been set.