The New York-listed company’s share price closed at $282.49 on Friday, reaching a new high in only four months on a weekly close basis. Its $148 billion market capitalization as of last week’s close has now topped that of Japan’s SoftBank Group at $122 billion.

SoftBank, one of the world’s most active tech investors, also has a stake in Sea’s regional peers Grab of Singapore and Tokopedia of Indonesia.

SoftBank’s shares plunged after its May 12 earnings announcement because “existing buyback programs have finished and no new ones were announced,” SMBC Nikko Securities said in a report, adding that decline in share prices of SoftBank’s key assets such as Alibaba Group Holding was another factor.

The Japanese investor saw its shares fall more than 3% and hit a year-to-date low on Monday morning, following a Wall Street Journal report about Credit Suisse stopping its lending relationship with CEO Masayoshi Son and reducing its business with the company.

Sea, which operates e-commerce, online gaming and digital financial services, last year became the most valuable listed company in Southeast Asia thanks to the pandemic-driven digital shift. A rare Southeast Asian company listed in the U.S., Sea has also benefited from heated markets spurred by high liquidity, which has pushed investors to diversify into new markets.

Sea’s recent upsurge comes as it launched its Shopee e-commerce platform in Chile and Colombia earlier this month, following launches in Brazil and Mexico. Combined, these four countries have a population of about 400 million versus Southeast Asia’s 650 million. 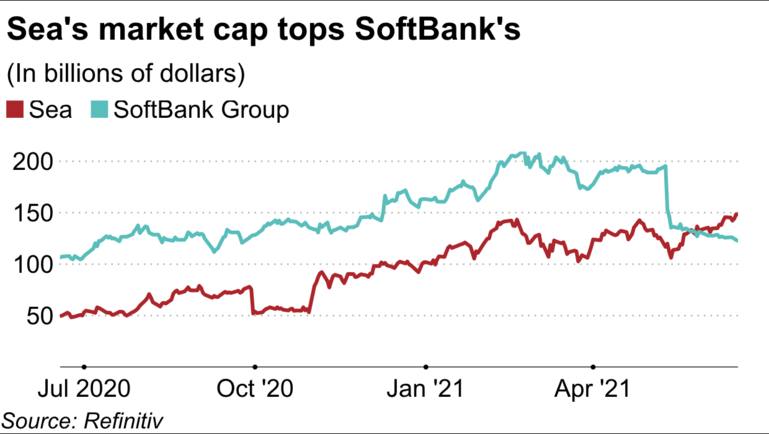 The official websites for Sea in Chile and Colombia show consumers piling into products such as watches and smartphone accessories, and taking advantage of perks like free delivery, similar to Sea’s operations in Southeast Asia. Nikkei Asia understands that Shopee is only supporting cross-border e-commerce in the two new markets, meaning that the products offered are from other countries such as China.

Headquartered in Singapore, Sea used to focus primarily on Southeast Asia and Taiwan but is increasingly looking at Latin America. After its e-commerce launch in Brazil in late 2019, it entered Mexico in 2021.

Founder and CEO Forrest Li told Nikkei last year that his company intended to bring its Southeast Asia experiences to other emerging markets like Latin America, noting that Sea’s online game Free Fire is quite popular there.

Meanwhile, investors will be closely watching Malaysia’s foray into digital banking. License applications in the country will close on June 30. Bank Negara Malaysia, the nation’s central bank, has said it will issue up to five digital banking licenses to qualified applicants by the first quarter of 2022.

Sea declined to comment on whether it is taking part in the bid, but Bloomberg reported last week the company was planning to apply for a license. A banking license in Malaysia allows licensees to offer more online financial services such as loans and deposits.

The company already received a Singapore digital banking license in December along with three other parties, including a consortium between Grab and Singapore Telecommunications. Sea’s services are expected to start early next year. In addition, the company has acquired Indonesian local lender Bank BKE, setting up ways to offer more digital financial services in the region’s biggest economy.

Sea’s position as a “rare Southeast Asian stock” in the U.S. will likely remain for several months, as Grab announced on June 9 a delay of its planned IPO. The super app operator had planned to complete a merger with a special purpose acquisition company, or SPAC, in July but the deal is being pushed back to the fourth quarter of this year.

Sea’s other regional rival GoTo — a merged entity of Indonesia’s Gojek and Tokopedia — also aims to go public later this year but specific plans have yet to be announced.