– ZAR softer amid stronger USD and faltering precious metals
– Oil price losses, yield appeal tempering USD/ZAR’s recovery
– But move above 14.80 puts July highs of 15.0 back on table
– A rally above 15.0 would open door to 15.65, charts suggest 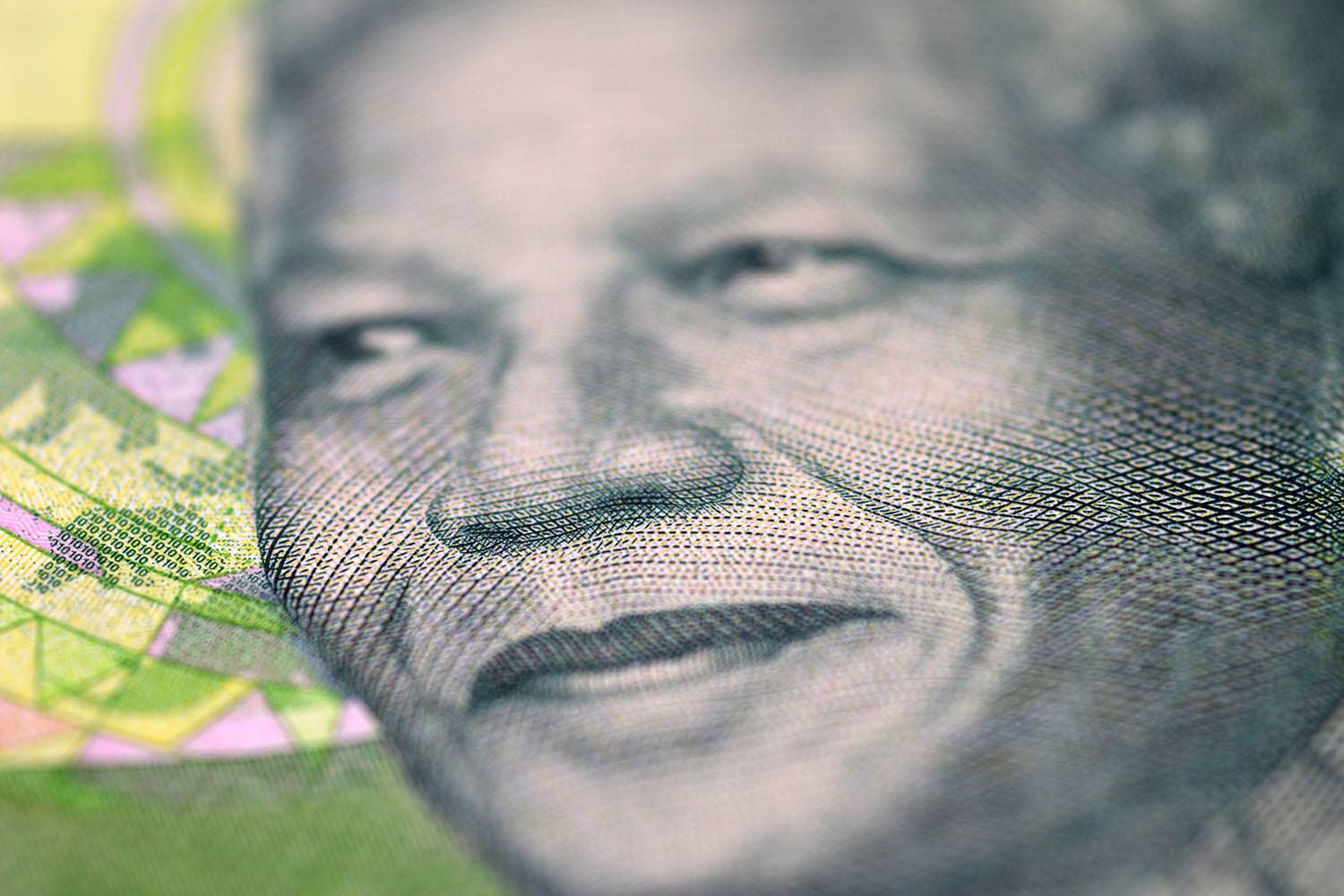 The South African Rand has remained on its back foot thus far in August and could still be susceptible to a further correction over the coming weeks if the Dollar’s resurgence and global growth concerns continue to dampen commodity prices, which would risk a USD/ZAR move to 15.0 or above.

South Africa’s Rand has lagged major developed and emerging economy currencies across the board this last week in an underperformance that is being perpetuated by an ongoing turn higher in USD/ZAR, which rose tentatively above 14.80 in the Tuesday session.

Losses have built since last Wednesday’s Institute for Supply Management services sector PMI hinted that the U.S. economy may have shifted into a higher gear again last month, an idea that was given further credence by last Friday’s non-farm payrolls report, both of which have lifted the Dollar.

Strong American economic data has all but sealed the deal for the Federal Reserve (Fed) to announce plans for a tapering of its quantitative easing (QE) programme over the coming months and has as a result lifted the all-important two-year U.S. bond yield sharply in the last week.

“The rand is likely to move on global sentiment but remain relatively weak, while the market continues to come to terms with last week’s cabinet reshuffle. The major data print for the week globally will be the latest US CPI figure, which is expected to provide further justification for the start of asset purchase tapering by the Fed this year,” says Siobhan Redford, a macroeconomist at Rand Merchant Bank. 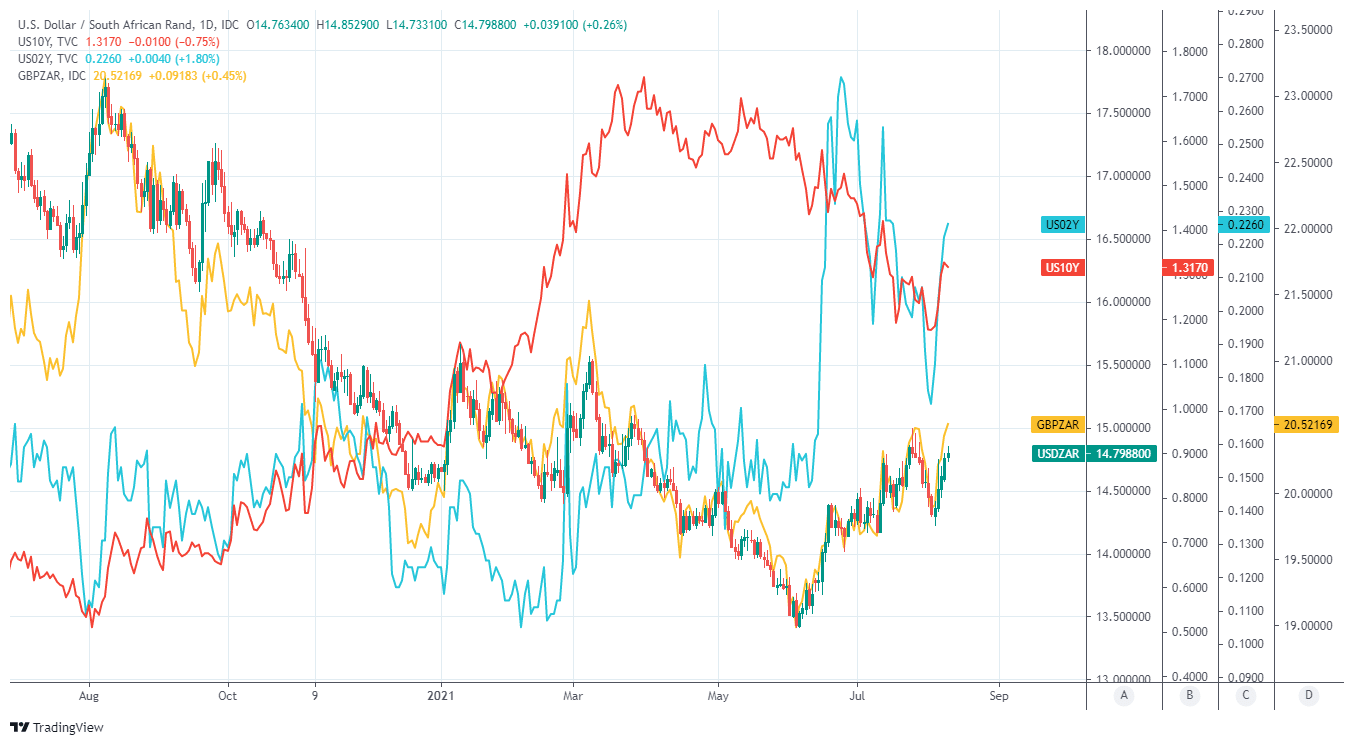 Above: USD/ZAR shown at daily intervals with GBP/ZAR and 02 as well as 10-year U.S. bond yields.

All currencies are sensitive to the trajectory of U.S. bond yields although none more so than emerging market currencies that are generally perceived by investors as being more risky, and the most important two-year U.S. bond yield had risen by almost a third during the week to Tuesday.

While the Fed’s eventual tapering of its $120BN per month QE programme has been on the radar of investors for some time, U.S. bond yields had declined throughout recent months as the market appeared to judge that any action from the Fed was unlikely to actually materialise.

As a result, the upturn in yields has been sharp and the Dollar has caught a bid in tandem with it, though Fed policy changes have implications for more than just the bond market and the Rand also faces a broader set of headwinds too.

“Weaker global growth amid a tightening Fed will make the upcoming environment increasingly challenging for commodities but we would not expect wider currency reactions to be uniform. The likes of AUD, CLP, BRL, RUB and ZAR will be in particular focus given their “dual exposures” to commodity-led terms and trade and the Fed,” says Geoffrey Yu, an FX and macro strategist at BNY Mellon. 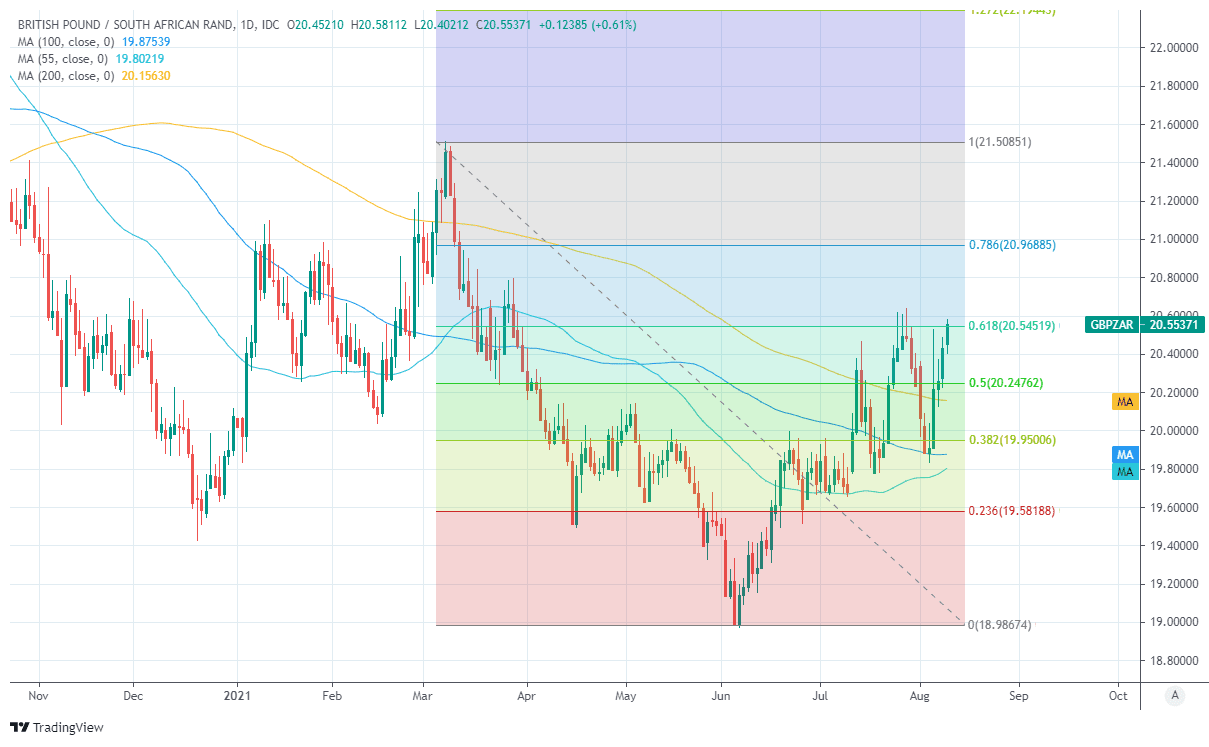 “On the other hand, we are seeing a clear hawkish turn in many of their central banks so the markets need to be aware of offsetting forces,” Yu says.

While the coronavirus has been beaten into retreat in Europe and some parts of the U.S., with vaccinations appearing to sever the link between infections and hospital admissions, the disease has gained further momentum across large parts of Asia of late including in China.

This is a constraint for the global economy and a further burden for commodity prices that have done much heavy lifting for the Rand this year.

“In spite of civil unrest which the SARB says completely offsets the surprise growth gains of 1Q21, the ZAR remains resilient. Driving that strength is commodity price gains (Terms of Trade still 50% higher YoY) which are being realised in the form of monthly trade surpluses in excess of ZAR50bn (US$3.5bn+),” says Petr Krpata, chief EMEA strategist for FX and interest rates at ING. 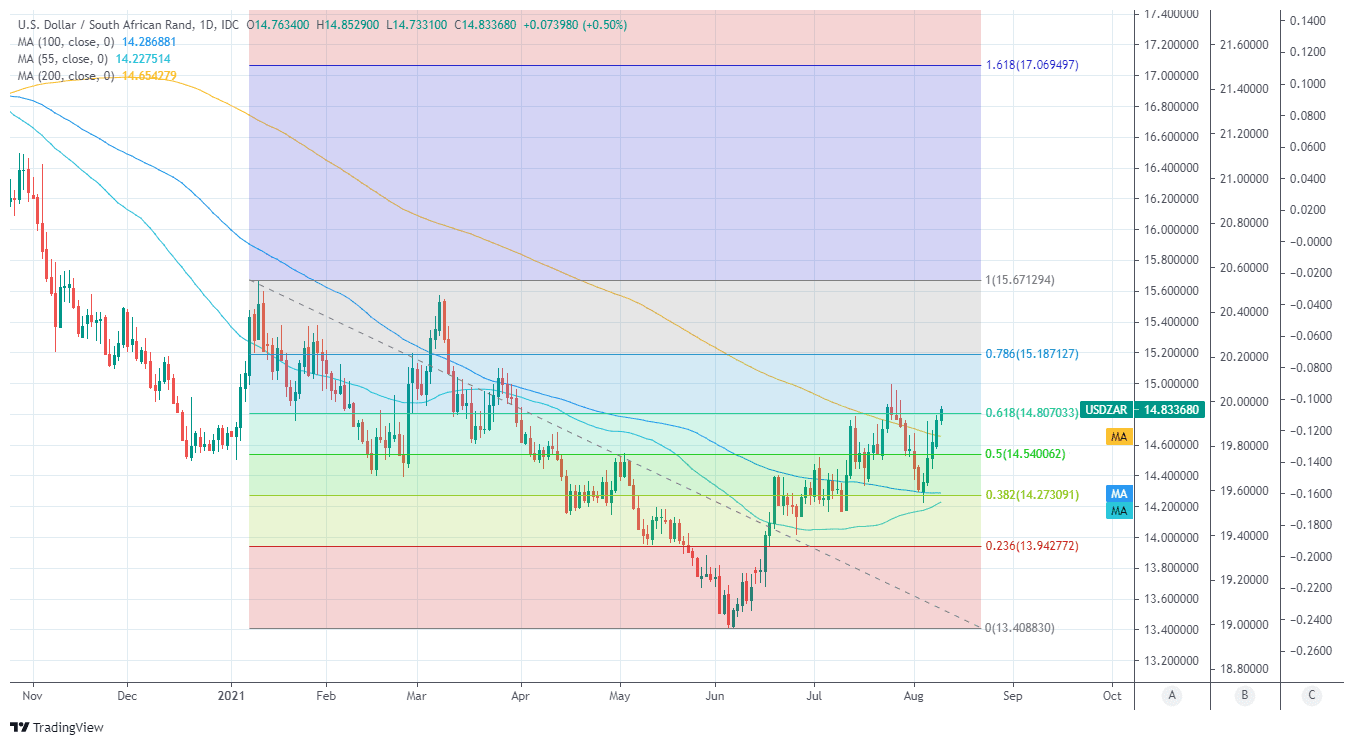 “Unlike other EMs, South Africa’s inflation is very well contained and leaves the SARB in no hurry to hike the 3.50% policy rate. $/ZAR to stay offered over coming months, but 14.00 looks like a floor,” Krpata adds in a recent review of ING’s forecasts.

Earlier strong gains for commodities, including precious metal prices that were under pressure in the last week, have lifted the value of South Africa’s exports relative to its imports this year and boosted ‘fair value’ estimates produced by many commercial bank financial models.

But with global growth concerns renewing while U.S. bond yields and the Dollar rise prices of some of these commodities have corrected lower and taken connected currencies with them.

Now analysts studying the charts suggest that a USD/ZAR move back to July highs around 15.0 could be in the pipeline, with much potentially at stake for the Rand if and when it reaches these levels as a daily close above the threshold could potentially open the door to further losses for the Rand.

“USD/ZAR’s slide lower has been contained by the 55-day ma at 14.2183 and we favour further near term recovery towards rally off the 2021 high and Fibo at 15.6645/15.6768 short term. Initial resistance is 14.9972/15.00 and above here is needed in order to confirm that the market is ready for another swing higher,” says Karen Jones, head of technical analysis for currencies, commodities and bonds at Commerzbank. 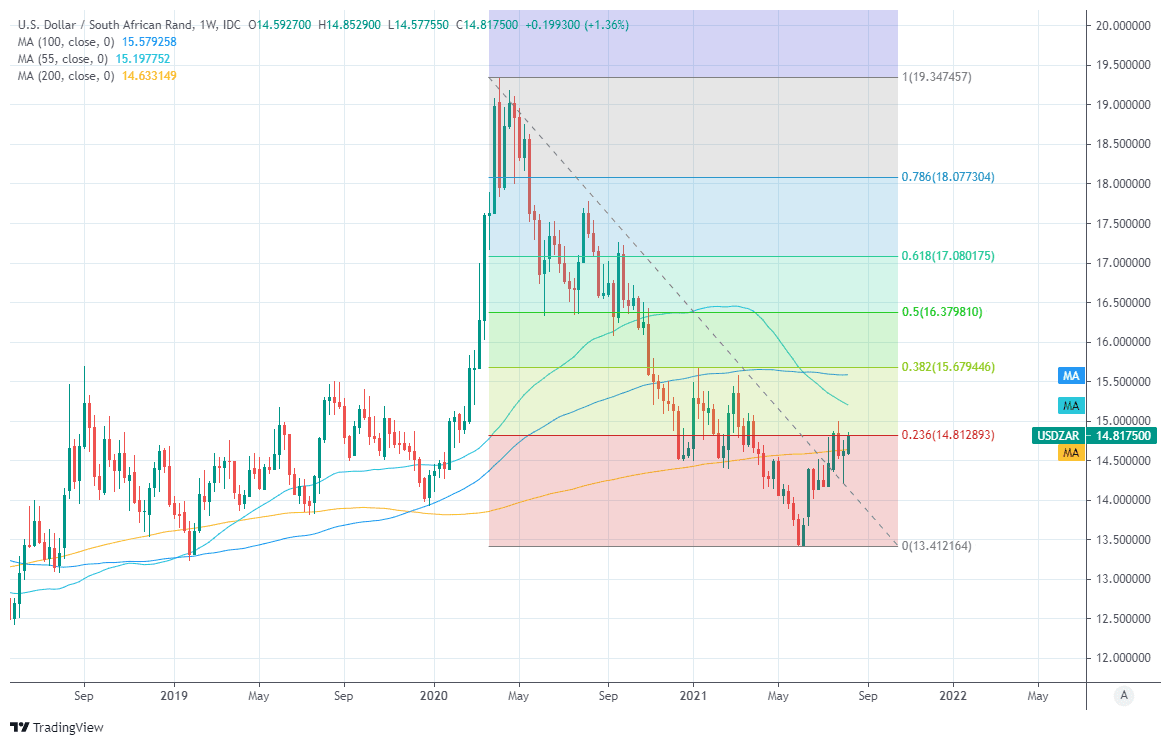 Above: USD/ZAR shown at weekly intervals with major moving-averages denoting possible areas of support and resistance, and Fibonacci retracements of March 2020 downtrend indicating areas of resistance.