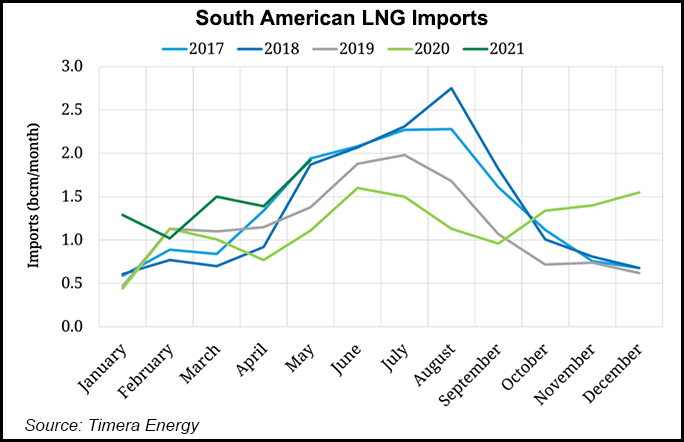 Even as the first ever cargo of LNG is arriving this week in Mexico’s Baja California Sur, the country in fact has seen a sharp slowdown in LNG imports at its Manzanillo and Altamira terminals this year. That slowdown comes as about 13 Bcf/d of import capacity via pipeline from the United States is now online.

Further south, though, demand is booming, principally because of market factors coupled with the worst drought in Brazil in over a century.

So far this year, LNG imports are up 60% in Brazil, according to consultancy Timera Energy. Some of this new demand is pulling Atlantic cargoes away from Europe, contributing to a surge in European energy prices.

South America together with the Middle East typically account for about 4% of the global gas trade. However, they are currently taking twice as much in LNG deliveries, according to Vortexa analysts. In Latin America, meanwhile, NGI data shows delivered ex-ship prices are above $9.00/MMBtu.

Brazil’s energy matrix is heavily dependent on hydropower and when reservoirs run dry, it relies on alternative sources of power. New rules in the gas market that have allowed for competition along with a robust infrastructure buildout have also facilitated Brazil’s LNG demand.

“The big demand opener in the region is Brazil,” Wood Mackenzie principal Ignacio Rooney told NGI’s Mexico GPI. He is based in Buenos Aires. “With the deregulation of the gas markets, plus the infrastructure buildout to receive LNG, that has been the most significant change.”

Rooney cautioned, however, that the gains must be seen in the perspective of the drop in demand in 2020 because of the coronavirus.

There are about 10 regasification projects in different stages of development in Brazil, principally in the south, according to shipbroker Poten & Partners.

Consultancy BRG Energy & Climate for South America said natural gas-fired power generation in Brazil could grow by 20 GW by 2040, rising to 15% from 9% in the energy mix. Market deregulation would also end the monopoly that state-owned Petroleo Brasileiro SA, aka Petrobras, has had in the gas market to date.

Argentina is expecting to up its LNG imports this year by at least 10 cargoes after hiring a second floating LNG import option.  The Exemplar floating regas unit has storage capacity of 150,900 cubic meters and has been leased for the 2021 winter season in Argentina.

The floating system is seen as providing “reliability and stability to the country’s energy system,” Exemplar CEO Steven Kobos told NGI’s Mexico GPI. He said the contract could extend until September.

“We are expecting a cold winter and high demand,” Kobos said. “We have run the calculations, and I understand the savings in terms of not using liquid fuels this winter with the two LNG terminals is $512 million.”

Last winter, Argentina’s Integración Energética Argentina, known as Ieasa, purchased 28 LNG winter cargoes to meet demand. The number of cargoes is expected to rise to at least 37 in the upcoming Southern Cone winter as demand heats up and domestic production continues to lag pre-coronavirus levels.