The Chinese women desperate to keep working but forced to retire

China’s female professionals are challenging the world’s lowest retirement age as Beijing grapples with balancing the needs of an ageing workforce and youth unemployment.

Court records reveal that Chinese women have sued their employers more than 1,000 times since 2019 for making them quit work at 50, while their female colleagues in management positions can stay on until the age of 55. In the decade before 2019, there were fewer than 800 such cases.

China’s labour rules require women in certain professions to retire earlier than others, but the law is vague in specifying which groups fall under the policy. In the US, full retirement for men and women begins at 66.

The surge in retirement disputes highlights China’s demographic quandary: the country’s population is ageing and its birth rate is declining, creating an economic time bomb. At the same time, the government is striving to meet ambitious economic growth targets as state pension funds run perilously low.

“It is true that our retirement rules have led to a waste of human capital and pressure on the pension system,” said a Beijing-based government adviser who asked not to be identified. “But the authorities also don’t want old people to compete with young ones for jobs that are still in short supply.”

China established its retirement system in the early 1950s, when Beijing set the mandatory age for leaving the workforce at 50 for most women, 55 for female workers in management roles or with special skills and 60 for men regardless of their position.

I have both the strength and willingness to keep my job. Too bad the court wouldn’t listen to me

The arrangement, said analysts, was then a good match for a country in which citizens rarely lived past the age of 50 and women had six children on average.

“We made women, especially ordinary ones, retire earlier so they could spend more time caring for the family,” said Yuan Xin, a Tianjin-based demographer and government adviser.

Since then, life expectancy for Chinese women has risen to almost 80 years, and births have plummeted, despite the relaxation of family planning policies. China’s population grew at its slowest rate in decades in the 10 years to 2020.

Those factors, combined with improved education and rising incomes, have prompted more women to concentrate on their careers and build up retirement savings.

The Chinese Academy of Social Sciences, an official think-tank, said in a report that it expected the country’s state-backed pension fund to run out of money as early as 2035. “There needs to be a new policy on late retirement as soon as possible,” said Fang Lianquan, one of the authors of the study.

Despite ambiguous Chinese labour laws and the resistance of many female professionals who want to work until 55, the policy of early retirement has remained unchanged.

In the eastern province of Jiangsu, Wang Yun, 51, lost a lawsuit this year against her employer, a retailer where she served as a marketing manager, for making her retire at 50. The case fell apart after the defendant presented its newly revised corporate charter, which limited managerial positions to directors and above.

“I have spent almost a decade managing people and I have both the strength and willingness to keep my job,” said Wang. “Too bad the court wouldn’t listen to me.”

Another big obstacle to changing China’s retirement policy is the country’s youth. Even as the nation’s working-age population declines precipitously, many younger workers are struggling to find jobs.

The unemployment rate for Chinese adults aged under 24 is more than 13 per cent, compared with a national average of about 5 per cent. That shortfall of jobs would be further exacerbated if older workers put off retirement.

“The Chinese economy doesn’t allow both the young and the old to be fully employed,” said an adviser to the Ministry of Human Resources and Social Security, which sets retirement policy. “We can only prioritise one group of people.” 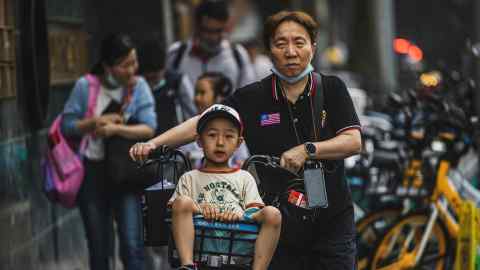 Another barrier to raising the retirement age is the large numbers of female adults, led by low-end workers, who want to enjoy pension benefits sooner following decades of toiling on factory floors or in office cubicles.

In the northeastern city of Fushun, Wang Feng, a 50-year-old office manager, retired this month even though Chinese law allowed her to work another five years.

“I have been busy for more than three decades and I didn’t feel well over the past few years,” said Wang. “I don’t want to work any more.”

You Jun, deputy minister of human resources and social security, said in February that China would extend the retirement age in a “gradual manner”, but did not offer a timeline.

Government advisers said the reforms could begin next year when the official retirement age for both men and women would increase by a few months.

That will do little to ease the concerns of many female professionals, however. “Perhaps my daughter’s generation will have more freedom to choose when to retire,” said Liu Hui, a 49-year-old marketing associate in Shanghai. “I probably won’t have that luck.”

Video: Will China become the centre of the world economy?