Britain has overtaken Germany as the savings champion of Europe, new data has revealed.

Britons have been squirrelling away more money than any of their European counterparts since the pandemic began, according to analysis by savings platform Raisin.

A total of £81billion was stashed away in savings accounts in the first half of 2021 – the highest amount ever saved during a six-month period. 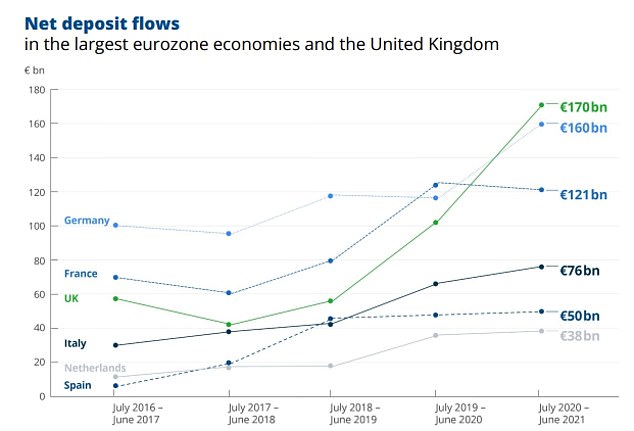 Savings surge: In Britain, deposits have accelerated since the start of the pandemic, with savers increasing their bank balances by 17% between June 2020 and June 2021

Meanwhile, savers from the eurozone are now on average growing their bank balances at a slower pace than they were at the start of the pandemic.

In the UK, savings habits have gathered pace ever since the pandemic began, with savers increasing their balances by 17 per cent between June 2020 and June 2021.

During this time, eurozone savers grew their deposits by 6.5 per cent – almost three times as slow as the UK.

But whilst our European counterparts have cut back on their savings habits, British savers have shown no signs of slowing down even after the easing of Covid-19 restrictions.

Savings in the UK increased by an extra five per cent over the first half of 2021 compared to the same period last year with British savers boosting their balances by £1,237 on average. 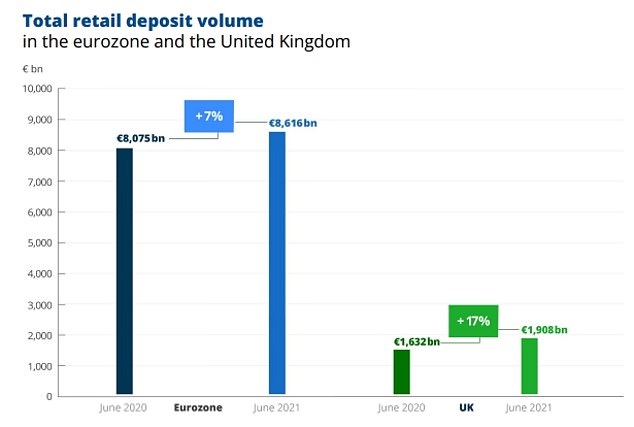 In the UK, deposits have grown at an accelerated pace since the start of the Covid-19 pandemic, with savers increasing their bank balances by 17 per cent  between June 2020 and June 2021.

In contrast, savers from the euro-area only grew theirs by an average of £691 per person during the same period.

In France, savings actually took a downward trend in the first six months of this year, with net inflows falling by four per cent. 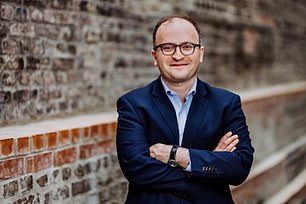 Even the Germans, renowned for being prudent and disciplined when it comes to managing their money despite low savings rates, were unable to keep up with the British savings surge, with deposit inflows rising by 2.9 per cent between January and June.

Dr. Tamaz Georgadze, co-chief executive of Raisin DS said: ‘Savers from the UK have been putting more and more money aside since the Covid-19 crisis began, and have now displaced their German counterparts as the biggest savers in Europe.

‘However, British savers are in the same boat as their European neighbours, earning little to no interest on their savings.

‘With inflation on the rise and the continent gradually opening up, people may find it more difficult to save as much as they did before.’

How do our savings rates compare?

Despite UK savings rates being at rock bottom they appear to be more favourable than in other European countries.

For example the average one year fixed rate deal in the UK is 0.76 per cent, according to Moneyfacts, whereas in Germany the average equivalent is 0.24 per cent based on Raisin’s analysis of German savings website Kritische Anleger.

This means that the average UK saver with their money in a one year fixed rate deal will be earning over three times the interest of a German counterpart.

The average £10,000 deposit in a British one year fixed rate deal will earn £76 after one year whereas in Germany it would earn £24.

Although, many of the biggest banks are paying next to nothing both in the UK and across Europe, competition among the UK’s challenger banks has meant British savers have the best rates of any European country. Savers accessing best bank offers from Scandinavia, Italy, and the UK, stand to alleviate the worst effects of inflation on their savings, if not earn a few euros.

The UK is currently ahead of Sweden, Germany and Poland in offering the highest possible rates for both one year and three year savings deals, according to Raisin’s analysis.

But there are concerns that with rising inflation British savers may also begin to lose faith in saving. 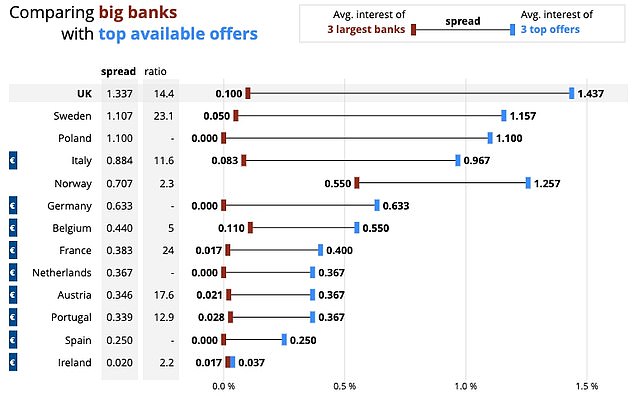 The UK together with Italy and the Scandinavian countries are the markets with the widest spreads between interest rates at the big banks and top available rates.

Although inflation dipped to 3.1 per cent in September, it is expected to rise to 4 per or more in the coming months – as highlighted in Chancellor Rishi Sunak’s Budget speech.

However, the expectation is that inflation may only be temporary and that UK savers should be taking advantage of some of the deals on offer via challenger banks and lesser known names across the savings market.

At present, the market leading easy access deals pay 0.65 per cent, whilst the leading one-year fixed rate deal is currently paying 1.45 per cent.

Kevin Mountford co-founder of Raisin UK said: ‘Whilst increasing inflation can be a deterrent to savers, the economists believe that any peak will be short lived.

‘As such UK consumers should continue with positive savings habits and also take advantage of some of the relatively high rates that are currently available in the market.’