Volatility in the global markets was sucked out, leaving major currencies mostly range-bound as investors took the sidelines ahead of Thursday’s development – US May CPI print and European Central Bank (ECB) monetary meeting. Post-event risk, it appeared to add a little new direction to the currency market.Investors saw the US headline inflation rate soared to a 13 year high of 5% year-on-year (y-o-y) compared with 4.2% y-o-y in April and beating the consensus of 4.7% in the dollar market. Meanwhile, the US core inflation also jumped up 3.8% y-o-y from 3.0% y-o-y in April (consensus 3.4%), marking the faster reading since 1992.

While inflation hits a multi-year high, investors quickly realised that the bulk of the increase was driven by base effects. Besides, the breakdown showed the surge in used car prices skewed the inflation reading. With the overall inflation number is lopsided, investors pared back expectations of earlier-than-anticipated Fed taper plans – leaving the dollar weaker by end of the week, down 0.07% to 90.08. During the week, the dollar traded between 89.95 and 90.12.

Separately, Democrats on Wednesday began preparing an infrastructure bill for a vote in the House, with or without Republican backing.

President Biden will once again discuss the possibilities for a deal with Republican leaders this week after rejecting the GOP’s latest bill offer for a US$928bil (RM3.8 trillion) spending package on Friday.

The euro was flat, up 0.02% to 1.22 as ECB pushed back expectations to slow down the pace of the emergency bond-buying programme. Nonetheless, as widely expected, ECB kept its interest rates unchanged at -0.50%, and reaffirmed that it will continue to conduct net asset purchases under Pandemic Emergency Purchase Programme (PEPP) with a total envelope of €1.85 trillion (RM9.2 trillion) until at least the end of March 2022.

Meanwhile, the ECB had also become somewhat more optimistic on the outlook, which was illustrated in higher growth and inflation forecasts for this year and next as well as saying risks to the growth outlook were now roughly balanced. However, inflation forecasts for 2023 remain low and the ECB retains the view that higher inflation numbers remain transitory.

The pound strengthened by 0.14% to 1.42, taking cues from the weaker dollar. Still investors grew slightly cautious over the cable’s trade during the week due to the ongoing concerns over a potential delay on UK reopening plans as well as rising uncertainties over Brexit developments.

The yen appreciated by 0.17% to 109.3 benefiting from the falling US Treasury yields. Although Japanese PPI y-o-y recorded highest since September 2008 at 4.9% in May compared to revised 3.8% in April, it’s both Leading and Coincident Economic Index jumped higher at 103.0 and 95.5, respectively than the month before at 102.4 and 95.5 suggesting the recovery in the economy as the number of daily new covid-19 cases has dwindled significantly during the middle of May.

The ringgit saw firmer bids during the week, up 0.17% to 4.12 while briefly touching a one-month high of 4.117 amid the weakening of the greenback and stronger crude oil price which jumped to a two-year high.On the data front, the local unemployment rate eased to 4.6% in April compared to 4.7% in March supported by the increase of employed persons to 15.35mil from 15.33mil. Meanwhile, the industrial production and retail sales jumped to an all-time high of 50.1% y-o-y and 55.4% y-o-y, respectively in April, due to low base effects.

The US Treasury curve bull-flattened with the front to belly part of the curve eased 1-8bps while the back-end fell 12bps-13bps. The widely watched 10-year note fell 13.7bps to 1.432%, marking the lowest since March 2, while the spread between the US 10-year and UST 2-year have eased to 129bps.

Contrary to the conventional market expectations, the buying in the bond market came after the release of the higher US May CPI figure. This is telling that the devil is in the detail. The breakdown showed the surge in used car prices skewed the inflation reading. Used car and truck prices jumped more than 7% m-o-m (29.7% y-o-y), accounting for one-third of the total increase for the month. And the jumped can be easily explained by the base effects and the ongoing semiconductor shortages that ignited demand for used cars.

Hence, the data will remain noisy in the coming months until the normalisation in economic activity become more entrenched. In other words, the “transitory” inflation remains alive and Fed’s patient stance unlikely to change in the near term. As of noon Friday, the 2-, 5-, 10- and 30-year benchmark UST yields stood at 0.15%, 0.71%, 1.43%, and 2.12%, respectively.

The MGS front to the belly part of the curve eased by 2.5 bps to 5.5bps while the back-end was broadly unchanged. Nonetheless, a reopening auction of the 10 years MGS benchmark stock closed with a decent BTC of 1.966x and an average yield of 3.313%.

During the week (June 4–10), the FBM KLCI dropped 10.67 points or 0.67% to 1, 579.90 points, tracking the downtrend in both the Dow Jones Industrial Average (-0.32%) and the MSCI Emerging Markets Index (-0.34%). Globally, investors reacted mildly to a stronger-than-expected US May 2021 consumer price index (CPI) (vs a market selloff on a similar trend a month ago) as they continued to stand behind the Fed’s conviction that a surge in inflation would be transitory.

Investors also took comfort in a soft US May 2021 job report that supported the Fed’s accommodative policy. Locally, investors turned cautious as political leaders from both sides of the aisle were granted separate audiences by Yang di-Pertuan Agong at Istana Negara.

Foreign investors unloaded RM284.2mil worth of Malaysian equities during the week, pushing the year-to-date net outflow to RM3.3bil. Local institutional and retail investors continued to dominate the market with a participation rate of 45.5% and 39.2% in June respectively (comparable with 42.4% and 38.1% in May respectively). Foreign investors remained passive with a participation rate of 15.3% in June (compared with 19.5% in May).

Meanwhile, foreign investors piled into Malaysia Government Securities (MGS) for the 13th straight month with a net inflow of RM2.4bil in May 2021 (vs RM4.7bil in April 2021).

Equity trading activities subsided with an average daily value traded (ADVT) of RM3.8bil in June (vs. RM3.9bil in May). Similarly, turnover velocity fell to 52.1% in June (vs 54.2% in May).

During the week, five out of 13 sectors in Bursa Malaysia ended in the positive territory. The best performing sector was Transportation and Logistics (+6.8%) buoyed by a steep jump in the share price of a port operator on a privatisation deal. The worst performing sector was Technology (-3.0%) as investors were concerned over restricted operations and supply-chain disruptions amidst a new lockdown.

In the coming week, investors will keep a close eye on:> US retail sales (May) on June 15;

> China industrial production (May) on June 15;

> US interest rate decision on June 16; 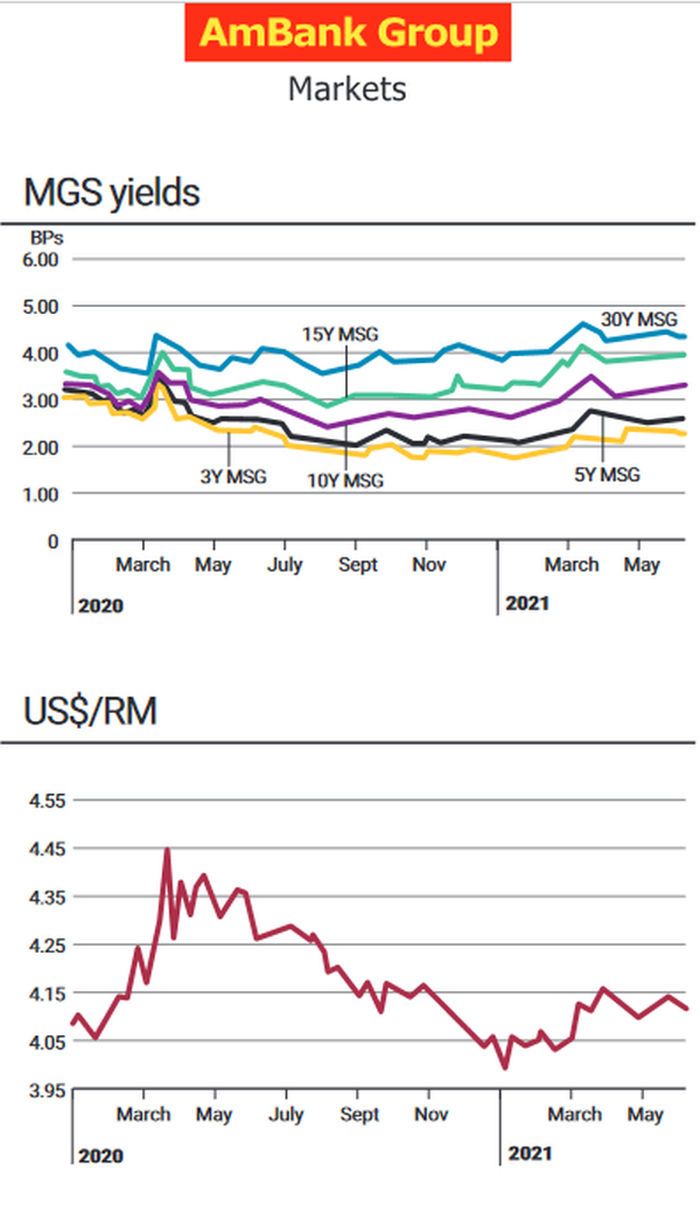