In a week that saw a plunge in stock volatility, investors scooped up companies mostly tied to a recovery of the world’s largest economy. On the other side of the spectrum, bond traders sent Treasuries slumping.

It may be too early to say that the reflation trade is coming back in full force, but at least the anxiety regarding the Federal Reserve’s hawkish shift has eased. At least for now, there’s a perception that officials won’t rush to boost interest rates despite mounting inflation pressures. Equities notched their best week since February, with financial and industrial shares beating the tech giants that powered the stay-at-home strategy. The Cboe Volatility Index, or the VIX, tumbled to pre-pandemic levels.

Aside from President Joe Biden’s infrastructure deal and reassurances from some prominent voices such as Fed Chair Jerome Powell, a batch of economic readings came out this week. Data Friday showed personal spending stagnated in May, while a closely watched inflation measure continued to climb. Meantime, U.S. consumer sentiment rose in June by less than forecast and longer-term inflation expectations moderated from a month earlier. 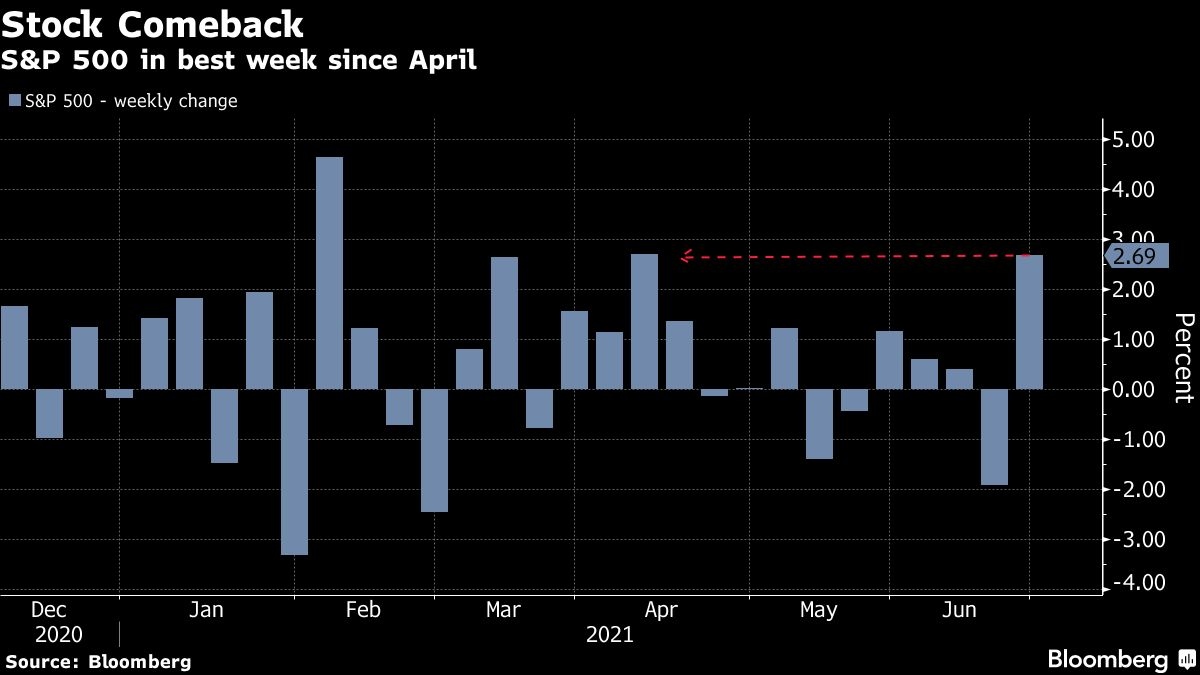 “Equities have rallied because the Fed is successfully walking the tightrope,” said Randy Frederick, managing director of trading and derivatives for Charles Schwab. “That’s a very tricky tightrope to walk — watching and taking action enough to keep inflation under control, but at the same time not acting too aggressively or too quickly that you squash economic growth.”

Among the corporate highlights, some of the biggest banks rose on speculation of a potential deluge of dividends and buybacks after the Fed’s stress tests. Virgin Galactic Holdings Inc. soared after getting regulatory approval to fly customers into space. Nike Inc. jumped on an upbeat forecast, while FedEx Corp. sank amid a disappointing outlook.

These are some of the main moves in markets: