However, the viral post is fake, and the image of USD 100 note with of Mahatma Basaveshwar’s image is morphed. According to News Meter, the image of the fake USD 100 currency note was created using a website called “pho.to“. People can create customised $100 bill with their images. Mumbai’s Mithi River Filled With Garbage And Plastic Waste? Old Image From Philippines Goes Viral With False Claim.

Notably, the bill number used in the viral image is the same as other customised bills displayed on the website. The US did not use Mahatma Basaveshwar’s image on USD 100 currency note. PM Modi had also not thanked the US for using the image of the Indian philosopher on the currency note. Centre Considering to Bifurcate Uttar Pradesh in 2-3 Parts? PIB Fact Check Debunks Fake News, Reveals Truth.

LatestLY advises people should verify news before sharing on their social media handles. 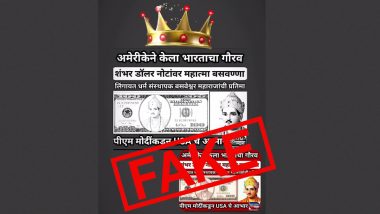 The post going viral is fake. The images used in the psot is morphed

(The above story first appeared on LatestLY on Jun 29, 2021 11:08 AM IST. For more news and updates on politics, world, sports, entertainment and lifestyle, log on to our website latestly.com).