The world’s top makers of COVID-19 vaccines dropped after tests of Novavax Inc.’s shots showed they were 90 per cent effective at preventing symptoms.

Stocks tied to inoculations already cleared for emergency use fell in Monday trading, led by Moderna Inc closed down 5.2 per cent after dropping 9.5 per cent intraday. Pfizer Inc. fell 1.3 per cent and the drugmaker’s German partner BioNTech SE dropped 7.5 per cent. Consumer giant Johnson & Johnson reversed earlier losses to close up 0.3 per cent, slightly more than the S&P 500 index as the broader market closed at record highs.

Novavax itself wasn’t immune from the downdraft it created, with the stock reversing a 9.5 per cent gain on Monday to close down about 1 per cent. The shot’s efficacy was better than Wall Street was expecting amid the spread of more resistant variants, and that’s raising the specter of new competition. Novavax now has “a viable alternative to mRNA vaccines,” like Pfizer and BioNTech or Moderna’s shots, an analyst at Jefferies said. 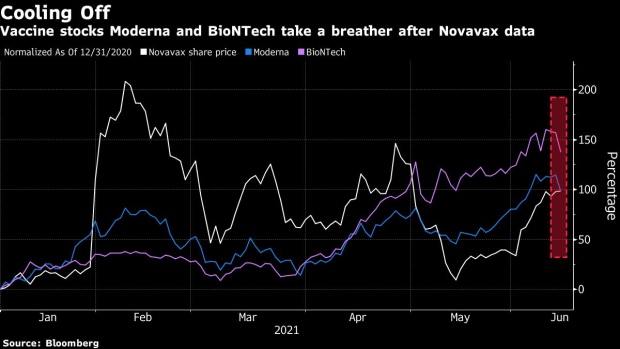 But with Novavax up 86 per cent so far this year and after a more than 2,700 per cent leap in 2020, it wasn’t enough to further bolster shares. Biotech stocks often climb ahead of highly watched catalysts, only to give back gains even after a positive update.