Wall Street stocks drift ahead of US inflation data

Wall Street equities were mixed ahead of US inflation data later in the week that may determine the future direction of central banks’ monetary policies.

The broad-based S&P 500, Wall Street’s dominant equity gauge, closed lower by 0.1 per cent, while the technology-focused Nasdaq Composite index edged up 0.5 per cent.

The Stoxx Europe 600 gained 0.2 per cent to end the session at a high, however, as investors rotated into relatively cheap European equities. The UK’s FTSE 100 climbed 0.1 per cent.

Economists surveyed by Bloomberg expect US inflation data on Thursday to show consumer prices rose 4.7 per cent in May from the same month last year, following an unexpectedly strong increase in April. Core inflation, which strips out volatile food and energy costs, is forecast to hit a year-on-year reading of 3.4 per cent, its highest level since 1993, according to data from the Federal Reserve Bank of St Loui.

The Federal Reserve, which meets next week, views strong inflation as a temporary effect of the economy reopening after pandemic shutdowns. Investors are alert, however, to persistent price rises that could force monetary policymakers to raise interest rates more quickly than planned. Since March last year, the Fed has purchased $120bn of assets each month and pinned borrowing costs at record lows.

“This will be a transition year for monetary policy,” said Gergely Majoros, a member of the investment committee at European fund manager Carmignac. After becoming used to central banks’ strong support, he added, “the transition is going to be a difficult one for investors to manage”.

Janet Yellen, US Treasury secretary, told Bloomberg on Sunday that it would be “a plus” if President Joe Biden’s multitrillion-dollar fiscal stimulus led to slightly higher rates.

“We’ve been fighting inflation that’s too low and interest rates that are too low now for a decade,” Yellen said. 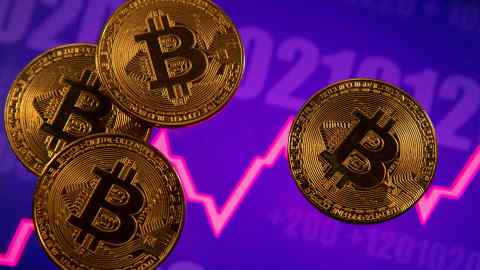 Financial markets were “hyperactive on cheap money”, added Patrick Spencer, vice-chair of equities at stockbroker Baird, referring to jumps in so-called meme stocks favoured by retail traders and frenzied price moves in cryptocurrencies. “We need to come off the sugar.”

The cinema chain AMC gained more than 14 per cent on Monday, while the software group BlackBerry and the retailer GameStop rose about 13 per cent.

After a bonanza first-quarter earnings season on both sides of the Atlantic, as businesses profited from resurgent demand as economies reopened, forecasters have widely upgraded their expectations for second-quarter results.

“Analyst optimism is getting to extreme levels,” Liberum strategists Joachim Klement and David Mak commented in a research note.

“We expect the next earnings season to become a reality check for many analysts and investors.”

The yield on the 10-year US Treasury bond, which moves inversely to its price, rose by 0.01 percentage point to 1.567 per cent. The yield has climbed from about 0.9 per cent since early 2021 as investors anticipated higher inflation, which erodes the value of bonds’ fixed interest payments.

Brent crude dropped 0.6 per cent to $71.44 a barrel after reaching its highest level since May 2019 in Asian trading earlier on Monday.

In currencies, the Mexican peso added 0.6 per cent to 19.82 a dollar after Andrés Manuel López Obrador looked set to lose a two-thirds supermajority in Mexico’s lower house of Congress he had needed for significant constitutional changes The euro was up 0.2 per cent against the dollar at $1.2194. Sterling gained 0.2 per cent to $1.4183.